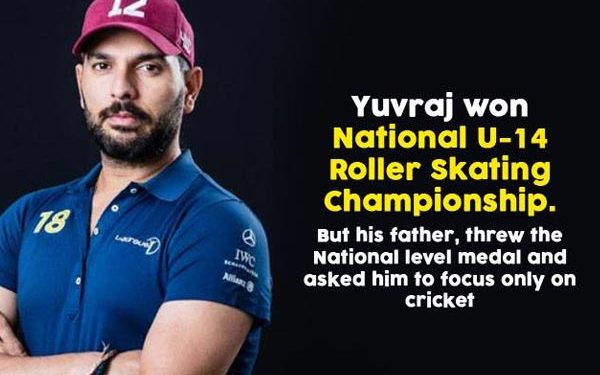 After hearing the big announcement the cricket world is saddened and the internet is flooding with congratulatory heartfelt messages for the cricket legend. For crazy cricket fans, it is the end of an era and for all 90s kids out there, your childhood is literally over.While everyone is paying their tribute to one of the best batsmen of the world, we have here some lesser known but interesting facts about Yuvraj Singh.1. Cricket was in his blood:Yeah, Yuvraj Singh has cricket instead of blood, flowing in his veins. His father Yograj Singh also played for Indian and was the former Indian fast bowler who played 1 Test and 6 ODIs for the national team. Yograj was also a Punjabi actor.

2. Cricket was not his first love:

Do you know when Yuvraj Singh was a kid he was more into roller skating? Yes, he was not only good in that sport but also won the National U-14 Roller Skating Championship. But his father threw away his National level medal and asked him to focus only on cricket.

Yuvraj started playing for Punjab U16s when he was 13, in the year 1995. Yuvraj was promoted to the Punjab U19s and scored an 137 runs unbeaten against Himachal Pradesh U19s.

Yuvraj’s first major break came when he played against Bihar in U19 Cooch-Behar Trophy. In the match, he scored 358 runs. In the year 1999-2000, he scored 149 runs against Haryana in a Ranji Trophy match.

6. Yuvraj is the second Indian to represent the county team of Yorkshire:

Yuvraj is the second Indian after Sachin Tendulkar to represent the county team of Yorkshire. He became the first Indian to play T20 cricket along with Mohammad Kaif and Virender Sehwag, the other two Indians in the County.

Singh scored more than 300 runs and had taken 15 wickets in a single World Cup. And he became the first all-rounder to pull this off. Yuvraj is also the first Indian player to score most sixes, more than 100, in Twenty20 matches.

9. The most expensive player of IPL:

Here is Yuvraj’s another big record. In 2015 IPL he was bought Delhi Daredevils with a bid worth 16 crores. It was the highest bid till the 11th edition of IPL.

Now this one might surprise you the most but as a young kid, Yuvraj acted in Punjabi movies. He did two brief roles as a child star in Mehndi Sajda Diand Putt Sardara. He even gave his voice to the Bollywood animated film Jumbo.

Lohri has Passed, the Songs have been Sung. What have we learnt?

Who doesn’t love Chicken tikka? Be it Aussies or Indians