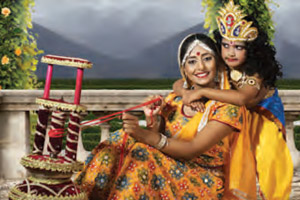 A sea of sequins and saris will descend upon Parramatta’s Riverside Theatre with A Magical Journey with Krishna – a sequin-studded Bollywood stage spectacular, which will be performed for one night only on August 27.

Produced by Swastik Institute of Dance, the play will feature sweeping dance performances, foot-tapping music, dazzling costumes, and a cast of more than 100 actors and dancers.

“It is unlike anything Sydney has ever seen,” says Sumati Lekhi, artistic director of Swastik Institute of Dance. “The show is based on the life and times of one of Hindu mythology’s most emblematic figures, Lord Krishna. But it has got a riveting contemporary subplot. There’s a lot of time travel and dramatic transitions between the current and the mythological eras, making this production epic in proportions.”

The plot revolves around Sunaina – a nine-year-old girl who, along with her parents, has just moved from Mumbai to Sydney. A new life in Australia is a thrilling prospect for the family, but for Sunaina, who’s had to leave her best friends behind in India, it’s a blow. She struggles to cope with the sea change and is almost on the brink of a breakdown, when something happens… someone appears in Sunaina’s life and takes her on a magical journey.

“The most beautiful thing about the play is that it has been entirely created in Sydney,” says Lekhi. “The stories are inspired by Indian mythology, but the script has been written from scratch and the entire cast and crew is Sydney-based. So we’re talking a whole lot of local talent.”

While the Bollywood-inspired show is heavily Subcontinental in its theme, the entire script is written in English, attracting not only a Hindi-speaking crowd, but also the wider Australian community who find the idea of exotic Bollywood on stage irresistible.

Produced by Sydney-based Swastik Institute of Dance, A Magical Journey with Krishna is a Bollywood-inspired stage show with foottapping music, sweeping dance performances and a cast of more than 100 actors and dancers.

For only one night in August this year, Sydney’s Riverside Theatre will be transformed into an ethereal landscape; a world of fearsome demons and larger-than-life gods, of star-crossed lovers and scheming lords – a world of palaces, rivers and lakes, and dusty villages that rise in their wake.

Inspired by the life and times of one of Hindu mythology’s most emblematic figures Lord Krishna, A Magical Journey with Krishna is an explosion of sequins and saris, colour and chaos, music and dance.It’s unlike anything you’ve ever seen in Sydney. Don’t miss it.

A highly accomplished Kathak performer, teacher and choreographer,Sumati Lekhi was the head of the dance department of Delhi Public School in India before she migrated to Australia and established Swastik Institute of Dance in 2007. Sumati offers Kathak, Bollywood and a range of other dance classes at her institute, along with training in acting as well as instrumental music.

Shabnam Tavakol, Director
An experienced dancer, choreographer and director, Shabnam has been working across multiple platforms for several years, including both stage and film productions.

Kunal Mirchandani, Playwright
Kunal Mirchandani has written and produce several theatre productions since arriving in Australia in 2005. He has also performed in some of these stage prodctions.

Swastik Institute of Dance is a Harris Park-based dance studio specialising in teaching Kathak (one of India’s most renowned classical dance forms), contemporary Bollywood and traditional folk styles such as Bhangra and Garbha. Established in 2007, the institute boasts more than 300 students and runs a highly successful dance troupe, Swastik Showbuzz, which performs almost every weekend in Sydney at events ranging from corporate events & functions to live concerts and festivals.

More than 200 arrested as tensions spike at US police protests in Saint Paul, Baton Rouge