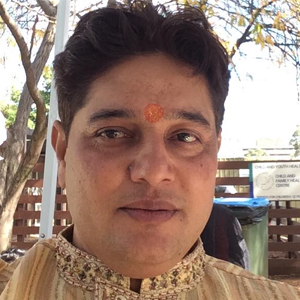 Acharya Shri was born on 13 March 1971, his father was a military personal and mother is very spiritual religious and knowledgeable. His belonging is with a reputed Kanyakugja Brahmin family. He completed his Shastri Degree from Dr. Sampurnanand Sanskrit University and completed his B.A from Allahabad University. He joined G.T.S college Bombay and completed his further studies to become as “ACHARYA SHRI”.

After his eight class , he became a student of  Dr. Sampurnanand Sanskrit University, Varnasi.  He the joined Maharshi Mahesh Yogi’s Vedi Vigyan Vishwa Vidhyapetham and he studied Sanskrit, Vedas, Puranas, various kind of Yogas and Meditations. Many other Indian desciplines of knowledge he learn’t as Joytish (Astrology), Palmistry, Ratna and Vastu Shastra. He is been honored by Indian Astrologer  Federation as ” Joytish Bhushan.”

He practices Astrology, Palmistry, Yagna-Hawan, Pooja-Path, Katha Pravchan, Meditation and all Vedic workshops in various parts of India. Migrated to Australia and  for past four years flourished is Vedic practice in Adelaide, Sydney , Melbourne and Perth.

All the below services are available all over Australia in Sydney, Melbourne, Perth , Brisbane and Adelaide

To know about future and to know about own powers and the auspicious time of our life Horoscope reading is must. Acharya Shri  will provide detail analysis based on the ancient Vedic Indian system Horoscope.

NSW Dine and Discover Vouchers: Get to know about it