Analysis of the SSM Survey 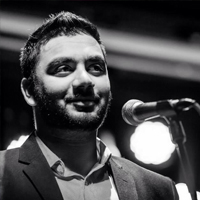 Akshay is a passionate, progressive and proud young man of Indian heritage from the Western Suburbs of Sydney, Australia. Akshay has a background and qualifications in the fields of Law, Economics and Public Policy (UTS) and currently works in Consulting providing strategic advice to StartUps and the NFP sector.

Although the final count of survey showed that the majority of Australian’s voted ‘Yes’ this was only accounting for the 79.% of Australians that voted in the survey. The conclusive victory of the ‘ Yes’ Campaign was a win of 61.6% whilst only 38.4% of participation voted ‘ No. However 19% of Australia didn’t have a voice and either by choice or implication became forgotten.

Whilst number of shock jocks and commentators have pressed their views on the survey from their ivory institutions away from the streets and homes of suburbia, the perspective of others that are on the ground and in the flesh have come to a number of alternate conclusions about the results of the Marriage Equality survey.

Marriage Equality as demonstrated by the recent survey has supporters and critics on all sides of the political divide. Despite Prime Minister Turnbull being an ardent supporter of the ‘ Yes’ Campaigning some of the most prominent supporters of the ‘ No’ campaign came from the Liberal Party. The same can be said of the Labor Party as we recognise that the Australian Parliament is ‘ a broad church’ with as many views as there are seats, especially within the Senate. This disparity between opinions that cross traditionalist party lines of progressive versus conservative in electorates, were most apparent in this survey as some of the places with the highest proportions of ‘Yes’ votes came from safe Liberal electorates whilst some of the highest proportions of ‘ No’ votes came from heartland Labor electorates. 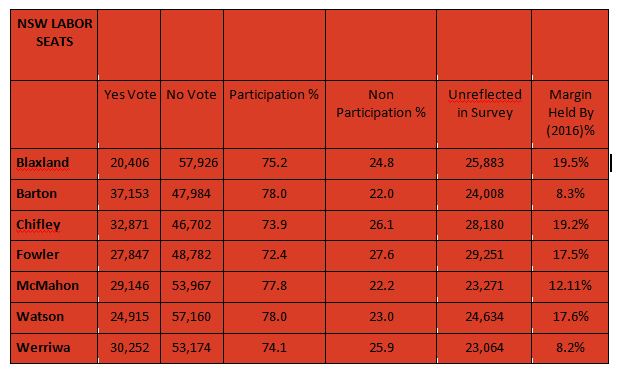 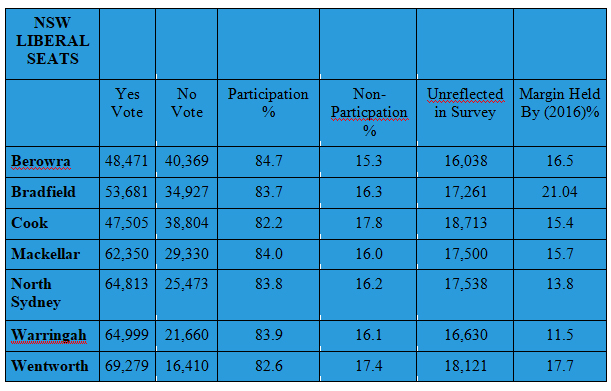 For some voters it was clear that the equality of love and recognition of relationships before the law were issues with greater importance than simply voting for the red, blue or green team. Furthermore it needs to be understood especially by more archaic commentators that modern Leftist and Right Wing views are not as far apart as their traditional definitions would have them to be. As a result it is quite plausible as seen, that electorates can be social conservative on certain issues and progressive on others, as some of the the safest ‘ Blue Ribbon’ Liberal seats actually brought the largest swings to the ‘Yes’ campaign. In rejecting the obiter of shock jocks, it is pretty hard to conceive the pattern of conservative and progressive attitudes reflected in the survey would be mirrored in an election.

Whilst Mcmahon is set in the heart of Western Sydney, it has been historically a Labor held area. It is considered one of the most culturally diverse electorates with a large proportion of new, and first generation migrant communities. Interesting as well it also has the one of the highest proportion of voters who identify with the Catholic faith. A large portion of households in this area tend to speak english as a second language (57.3 %) with only small portion of people having completed education at a tertiary level or beyond (13.7 %). The average household income is also lower than the State average ($1,412). Furthermore the lower median age demonstrates the vast proportion of younger individuals who may not have been able to participate in the survey (Median age is 35) . An analysis of McMahon indicates that many people would normally identify with ‘the Industrial Left’, voters who generally believe in collectivism, workers rights, social security and the vital role of government in creating and maintaining public education, health and services. This is slightly different from ‘ Progressive Left’ attitudes that are reflected in seats such as Grayndyler home to the legendary Labor heartthrob, Hon. Anthony Albanese.

The seat of Cook on the other hand is located primarily in the Sutherland Shire area. Despite having changed hands in yesteryears it is now one of the safest Liberal seats in the State and home to Scott Morrison, a former Liberal Party Director. In contrast this electorate has only recently seen a slight increase of diversity within its generally homogenous population with English spoken as a second language in a small number of households (24%) . Other factors such as the larger majority of its people being educated above tertiary level ( Degrees, 23.3%, Diploma Level 11.3 %) as well as a higher than average median household income ($1,805 per week ) in conjunction with a higher median age( 42 years) are all contributing factors that define and impact the result of elections and this survey. Despite being a safe Liberal seat, the seat is not as conservative as one might believe. Through an analysis of patterns within the seat it appears that people in Cook identify with a strong sense of economically progressive values mixed with libertarian attitudes. These voters would tend to be concerned with small business, and individual rights whereby the government should play a less significant role in defining their social structures. This is in contrast with perhaps the seat of of Mitchell in the ‘ Bible Belt’ of the Hills district which in contrast reflects more of the ‘ Conservative Right’ agenda’s. Mitchell is home to the young, ambitious firebrand, Hon. Alex Hawke.

Interesting whilst both seats may espouse some typical traits of fellow Liberal or Labor seats, ironically it was the seat of Cook that pulled in a ‘Yes’ vote of 55% whereas McMahon swayed towards ‘ No’ with 64%. Whilst many have listed suggestions of voter backlash and MP’s not reflecting their electorates, upon a minor analysis of the general response rates to the survey as well as the correlation of general voting trends at elections. Some entirely different can be seen. Whilst Mcmahon did vote ‘No’ it was noted that close to 22.2% of voters did not participate in the survey on the other hand in Cook 82.2% did participate. This trend was even made more apparent in other seats such as the Labor seat of Folwer which despite voting ‘No’ saw close to 28% of voters not participating in the survey. Conversely in Mackellar a Liberal strong hold which voted ‘ Yes’ saw the results reflecting close to 84% of all voters. Once a glance over voting trends and pattern are observed a strong connection between voter participation and informal votes can be observed at an election level. 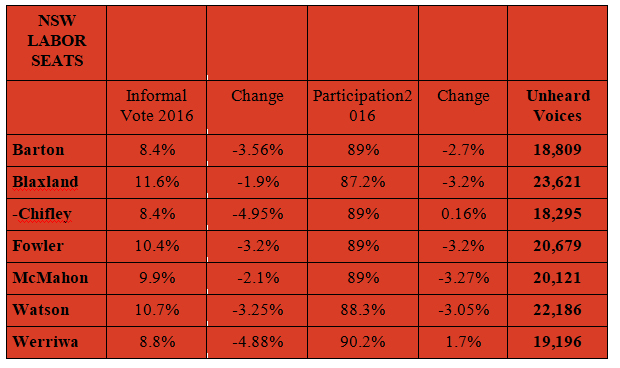 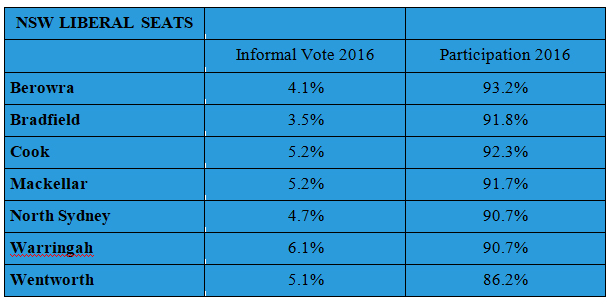 Note: Changes to informal voting and Participation in following electorates have been within the margin of error and insignificant in changing the result of a election ( Ceteris paribus)

Its clear to see that rather than Western Sydney seats being considered as a bastion of conservatism with regard to the Marriage Equality Survey, they are instead the most disenfranchised and voiceless with regard to the debate on issue. As noted previous by Chair of the Federation of Ethnic Communities Council of Australia Joseph Caputo, the high rate of informal voting in some seats was eroding Australia’s democracy,

‘It means that we do not get a real expression of the voting intentions’.
In relation to voting trends Lina Cabaero, coordinator of the peak group Asian Women at Work, who during elections holds workshops to help educate voters on how to properly fill out their ballot papers said

‘voter education was the key to increasing participation’.

With the absence of more formal structure in this survey as well as the absence of voter guidance as one would typically receive at a booth it appears that Western Sydney and in particular households of CALD backgrounds have been the unheard people of this survey. Although this article will not go in discussing the hypotheticals of how such votes would have gone. Considering the factors above it is clear that the survey is merely a partial reflection of the attitudes concerning this topic. Language, education and political participation are the most significant factors that are many effecting the opinions, voices and votes of ethnic communities right across the board.

From the perspective of an Australian Indian, it is clear that the survey was not only divisive but even as a measurement of Australian values, it was flawed in its reflection of the voices deep in suburbia. Australians from CALD backgrounds deserve to be counted and their views deserve to be reflected. After all migration and growth trends do indicate that we are becoming much more of a colourful nation or as some could also say a Rainbow Nation.
Despite the survey being a victory for all communities, the underlying of voicelessness is ever still a concerning issue as close to 4 million Australian out of the 16 million that where able to participate remained unheard. Who knows perhaps the ‘Yes’ result could have been even more convincing of a win.