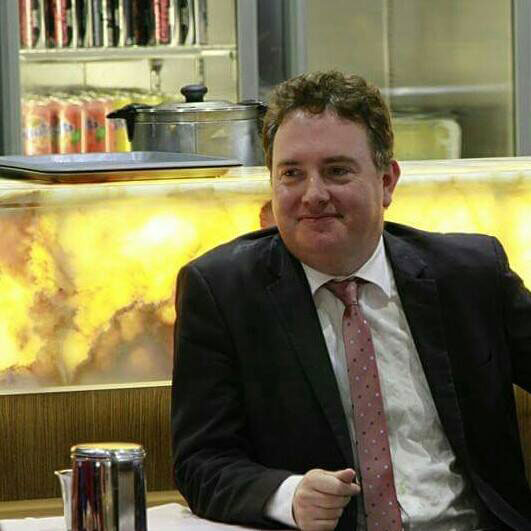 The Asian century, as referred to by recent and current Australian Prime Ministers, is shaping up with Asian business, trade and investment relations, filtering through into the Australia real estate market. The Foreign Investment Review Board (FIRB) in April last year released their 2013/04 their annual report, real estate applications account for 76% of the value of approvals in 2013-14, with China was the largest investor, 17 per cent of the total value), now ahead of United States, accounting for $12.4 billion foreign real estate.

According to Savills Research, Foreign Investors have ramped up their acquisitions for Australian commercial property market, spending in excess of $11 billion in 2015.

Their research on foreign commercial property investment in Australia for 2015, show the big three being China (30%), Singapore (29%) and United States (28%), accounting for 87% of activity from foreign buyers. 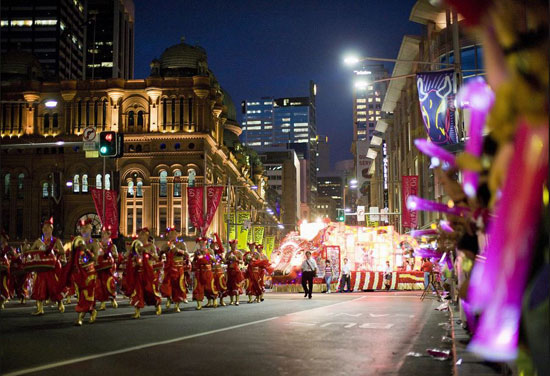 Offices were the main target with approximately 70% or $7.6 billion transacted, which was well ahead of the $1.82 billion on retail and $1.73 billion on industrial.

Foreign investment transactions accounted for 38% (up from 22% in 2014) of the more than $29 billion worth of commercial property transacted nationally in the 12 months to December 2015.

“We expect 2016 to see a continuation of money flowing into Australia and particularly from China and Singapore but also the USA with the low dollar and interest rates key drivers. We certainly don’t see any slowdown in investment from China in particular in the short term.

“For all of these investors Australia remains an investment destination of choice. Its stable political and economic climate provides a safe haven that also offers an excellent exchange rate and low interest rates,”

Since the Second World War, Australia after being the British Empire dominion in the Pacific region, began to be a major player in relations with its Asian neighbours. Once dealing with these neighbours in wartime situations, with Japan, China, Korea and Malaysia. All these Asian neighbours have turned into post war trading, business, investment, cultural and sporting relations. In recent decades, such relations have lead to our Asian neighbours becoming attracted to property investment in Australia, with our capital cities. 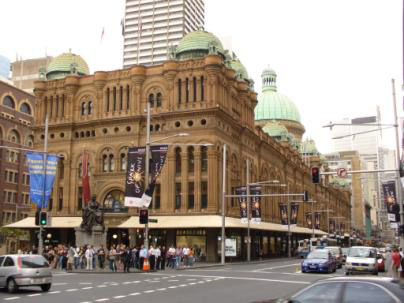 There are key reasons why Asians invest in Australian property, compared to other Asian countries or nations around the world – Australia has very stable government, good security, low interest rates in recent years, good infrastructure, good market and rental growth over long term that makes property a major asset class in Australia, compared to the rest of the world. Australia also has very property management systems in place, with high skills property professionals, with major property asset holdings, such as hotels, shopping centre, CBD high rise offices, industrial business parks etc. The chief executive of Chinese property website Gifang.com, Michael Yang, says that “Australia’s stable economy and top schools were the main drawcards for foreign buyers. People believe that this is a safe place for them to invest. The recent strength of the property market had made Australian real estate even more attractive to offshore buyers.” 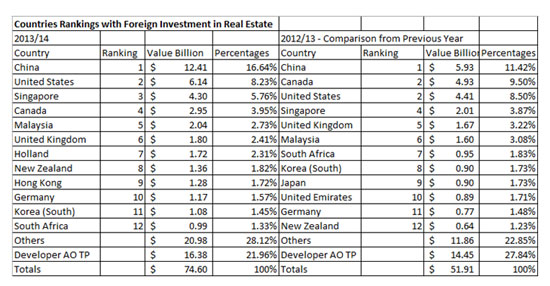 This table with the big increase on the value of real estate approvals by the FIRB, reflects a strong demand and attractive of Australian real estate by overseas investors. China is now the largest source of proposed foreign investment in Australia, mainly driven by a large increase in residential real estate approvals. The other major sources of proposed investment were the United States, Canada, Malaysia, and Singapore. Malaysia and Singapore replaced the United Kingdom in the top five sources of investment, showing proof of Australia’s “Asian Century” is filtering through, with business, trade and investment with its Asian neighbours.

Looking at different property sectors and the capital cities in the 2013/04 FIRB annual report, in summary –

Residential property accounts for $34.7 billion or 46.5% of the FIRB approvals in real estate during 2013/04. This is made predominately, in the FIRB approvals legal framework, new dwellings, apartments, townhouses and vacant land (construction within 24 months). There is also permitted existing residential property from overseas nationals (i.e., from New Zealand), who given approval, that complies with the FIRB legal framework.

Commercial property accounts for $39.88 billion or 53.5% of the FIRB approvals in real estate during 2013/04. This is made predominately, in the FIRB approvals legal framework, an overseas investor acquiring an interest in developed commercial real estate (for example, shopping centres, office buildings, warehouses, hotels and motels) that is valued at more than the applicable monetary threshold ($54 million or $5 million if heritage listed, unless from United States or New Zealand, who have higher thresholds) are required to notify and get prior approval before purchasing. For commercial development, foreign persons need to apply to buy or take an interest in commercial land for development, regardless of the value of the land. Such proposed investment is normally approved subject to conditions (such as, that construction begins within five years).

New South Wales with Sydney remains the premier state for foreign investment into Australian Real Estate, accounts for $22.67 billion or 30.4%. Followed by Victoria with Melbourne, $21.4 billion or 28.7%. Queensland with Brisbane, Gold Coast, Sunshine Coast and Cairns, $4.76 billion or 6.38%. Then Western Australia with Perth, 3.85 billion or 5.16%.

Looking the recent trends of Australia merging into the “Asian Century” with investment coming from Asia into the Australia property market, we have the following comparisons from six, ten and twenty years back (Source, 2013/14 FIRB annual report) – 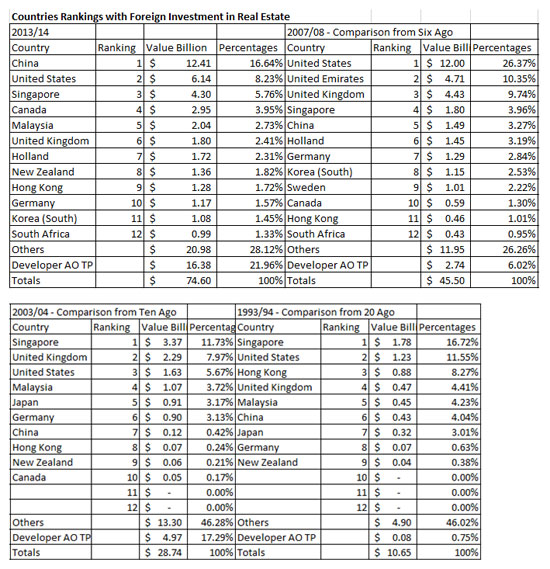 What is interesting from this above data, is the value of foreign investment in Australian real estate, from $10.65 billion twenty years ago in 1993/94, to $74.6 million in 2013/14. This is reflected in the legal framework changes over the years, opening up to foreign investment of real estate in Australia to our major trading partners in the last twenty years, with countries like United States, United Kingdom, New Zealand, Canada, China, Singapore, Japan, Germany etc. What is also more interesting, is that China is now number one over United States, our other Asian neighbouring are stronger in foreign investment of real estate in Australia, with countries such as Singapore, Malaysia, Hong Kong and Korea (South). United Kingdom continues to be major player in the top ten after twenty years, with Australia’s British-Commonwealth heritage ties. Germany and Holland also remains strong, as Australia’s links to the European Union. Other European countries, like Sweden, no longer major players, focusing more on the major players in Europe. Obviously, from the data over twenty years, our Asian neighbours lead by China have become the major players, making it the “Asian Century” for Australian in foreign investment into local real estate.

According to Austrade publications (Source, Department Foreign Affairs & Trade) “Australia has traditionally depended on foreign investment to supplement domestic savings. This capital has helped Australia become the world’s 12th largest economy, with 23 years of uninterrupted growth. International capital has enabled Australians to enjoy higher rates of economic growth, employment and standards of living than could have been achieved with domestic capital alone.” “Foreign investment stimulates economic activity – research has found that a 10 per cent increase in foreign investment in Australia could lead to a more than one per cent increase in GDP by 2020.” 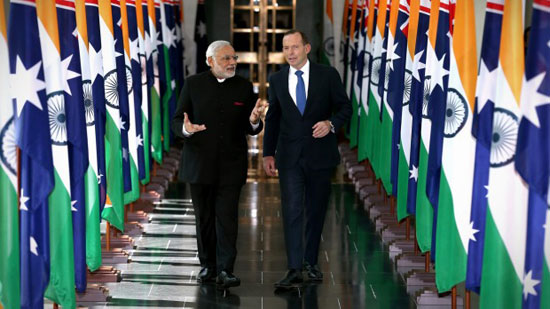 Free Trade agreements in recent years with China, Japan and Korea also focuses on to encourage more foreign in Australia real estate, allowing these countries to enjoy commercial property thresholds, similar to United states and New Zealand, of $1.094 billion, rather than the uniform commercial property threshold of $54 million restricted to other countries. This came into place for Korean in December 2014 and Japan January 2015 (Source, FRIB website). This is good news in the Australian commercial property sector, with the Australian residential property sector enjoying a boom with new residential properties bought by foreign buyers/investors taking advantage of low interest rates. India is next destination for Australia with Free Trade Agreement relations, with Prime Malcolm Turnbull keen to get Indian investors finally into the Australia real estate market.

Whist foreign investment of Australian real estate flourishes, instrumental Australia’s “Asian Century” with strong growing business, trade and investment relations with its Asian neighbours. Recent announcements of tougher foreign investment rules in property with the FIRB can put a damper on foreign investors, especially at the lower end with residential property, who are required to pay hefty $5,000.00 application fee for FIRB approval to acquire. When announcing such review and tougher new rules, the recommendations from the House of Representatives Standing Committee, chaired by MP Kelly O’Dwyer in 2014, included to establish a national register of land title transfer system to track foreign investment in residential real estate. Already coming into place soon, is a national on-line property exchange system – PEXA – for settlements with major banks and their settlement agents. Simon Henry, co-chief executive of the Chinese language website Juwai.com where many offshore buyers look to buy Australian property, said: “There is no other country that charges fees to foreign investors that is actually seeking foreign investment.”

Joe Hockey when as Federal Treasurer on the 2013/04 FIRB annual report, says “continuing increased investment interest in Australia by sovereign funds from North America, Europe, the Middle East and Asia, demonstrating Australia’s ongoing competitiveness as an investment destination.” The Victoria government has introduced from 1st July 2015 last year, a 3% foreign buyers tax, to cash in the foreign investment in real estate growth. 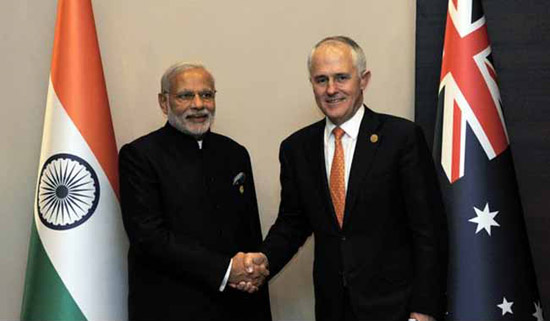 Written by Paul McKenzie, CEO of ABS Conveyancing & Valuations, is a property and conveyancing professional, been working in the in the property industry for almost 20 years.