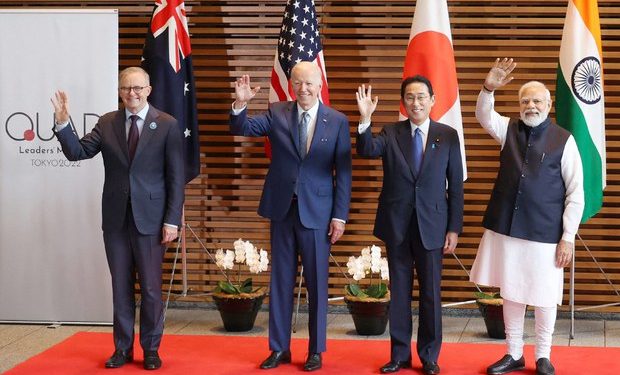 Leaders of the Quadrilateral Security Dialogue (Quad) met on Tuesday in Tokyo, with China’s increasing influence and assertiveness in the Indo-Pacific region looming large over the four-nation summit.

They announced the roll out of a major new maritime initiative that is expected to monitor Chinese maritime activities in the region.

Men of Indian Origin given Top Jobs at Multinational companies

Leaders of Australia, India, Japan and the United States said in a joint statement that they convened “to renew our steadfast commitment to a free and open Indo-Pacific that is inclusive and resilient.”

The statement did not mention China but said the Quad leaders opposed “the militarization of disputed features, the dangerous use of coast guard vessels and maritime militia, and efforts to disrupt other countries’ offshore resource exploitation activities” – actions that China has been accused of in the East and South China Sea.

“The Quad members would probably not say so out loud in public, but in private they would all acknowledge that the Quad only exists because all four members are nervous about the authoritarian tilt of an expansionist and assertive People’s Republic of China (PRC) under President Xi Jinping,” said John Blaxland, professor at the Strategic and Defence Studies Centre, Australian National University.

“By not being explicit about the raison d’être, the Quad countries hope to provide some space for other regional states to continue to engage constructively on security issues with Quad nations,” Blaxland told RFA.

The four leaders announced a so-called Indo-Pacific Maritime Domain Awareness (IPMDA) initiative that would support Indo-Pacific countries to monitor their waters, not only to respond to humanitarian and natural disasters but also to combat illegal fishing, another reference to China’s assertive actions in the regional seas and oceans.

A White House fact sheet said the IPMDA will allow tracking of “dark shipping” and other tactical-level activities.

“This initiative will transform the ability of partners in the Pacific Islands, Southeast Asia, and the Indian Ocean region to fully monitor the waters on their shores and, in turn, to uphold a free and open Indo-Pacific.”

“We hope certain countries would not see China through tinted glasses and make unwarranted accusations. Building small cliques and stoking bloc confrontation is the real threat to a peaceful, stable and cooperative maritime order,” he told a news briefing in Beijing Tuesday.

The Quad summit came a day after U.S. President Joe Biden attracted much attention and drew criticism from Beijing when he stated that he would be willing to use force to defend Taiwan in the case of any Chinese invasion.

China considers the democratic island a breakaway province and vows to “reunify” it with the mainland, by force if necessary.

Biden told reporters at a press conference on Tuesday that there was no change to the U.S. policy of “strategic ambiguity” on Taiwan, meaning the U.S. acknowledges the One-China policy but informally supports the island and provides it with defensive weapons.

In Beijing, Wang said Washington had “publicly or stealthily incited and endorsed ‘Taiwan independence’ separatist activities” and warned it to stop.

“If the U.S. continues to go down the wrong path, there will be irretrievable consequences for the China-U.S. relations and the U.S. will have to pay [an] unbearable price,” he said..

In his opening speech, Biden said the summit was about “democracies versus autocracies, and we have to make sure that we deliver.”

The Quad leaders also discussed the war in Ukraine, which Biden said had become “a global issue” and Japanese Prime Minister Kishida said a similar invasion should not happen in Asia.

Without mentioning Russia, as Quad member India has so far refused to condemn Moscow, the four leaders said they “reiterated our strong resolve to maintain the peace and stability in the region” at a time of profound global challenges.

This is the fourth meeting of the leaders of the Quad, but the second in person because of the Covid pandemic.

This is also the first summit for Australia’s new Prime Minister Anthony Albanese who was sworn in just a day ago.

Australia has been spooked by China’s growing presence in the Pacific islands, especially after Beijing signed a controversial security pact with the Solomon Islands that may allow China to deploy troops in Australia’s back yard.

“The new Prime Minister has made clear that in terms of broad security policy choices, he is aligned with the previous government,” said Professor Blaxland from the Australian National University.

“The difference lies in the rhetoric, Albanese probably will have a softer line.”

“It also lies in some of the substance on the issue of the environment. Addressing the felt need of nervous small Pacific Island nations is now seen as being of fundamental importance,” Blaxland said.

Baljeet Kaur is the first Indian climber to summit four of the world’s highest peaks in a single season.

Baljeet Kaur is the first Indian climber to summit four of the world's highest peaks in a single season.