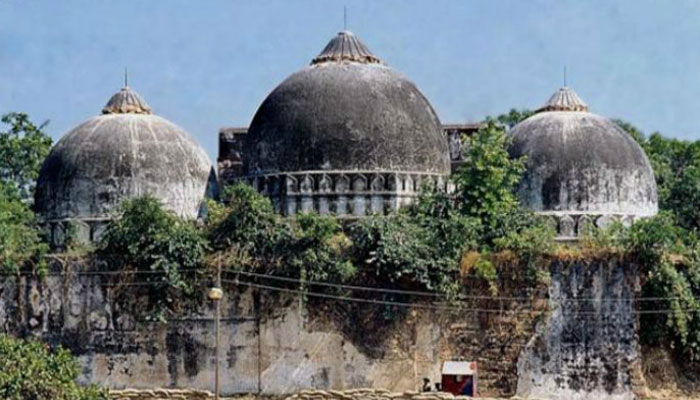 New Delhi: The BJP and its parent organisation Rashtriya Swayamsewak Sangh (RSS) on Tuesday welcomed the Supreme Court ruling on the long-pending Ram Temple-Babri Masjid dispute in Ayodhya, saying negotiations were the best way to resolve it.

Reacting to the apex court ruling, which called for an ”amicable” settlement of the highly-vexed issue, BJP spokesperson Sambit Patra said, ”Supreme Court has said that Ayodhya dispute is a serious and sensitive issue and has asked for amicable solution. We welcome the decision.”

BJP’s firebrand leader Vinay Katiyar too welcomed the apex court ruling, saying, ”We have government in UP and the Center. We all will find the solution after conversation.”

Speaking on the issue, Dattatreya Hosabale, senior RSS leader, said, ”It is to be decided by the Dharma Sansad and all the other parties who went to court.”

However, he too supported the cause of Ram Temple.

The VHP, which pioneered the Ram Temple movement, said that it will launch a movement called ‘Ram Mahotsav’ from March 26 to April 16 in view of the apex court ruling in the case.

However, another senior BJP leader, Subramanian Swamy, said that the Ramjanmabhoomi in Ayodhya should be used only for constructing the Ram Temple.

“Masjid can be built anywhere, Namaz can be read anywhere… it can be read on the street. The Ram Janmabhoomi is for the Ram Mandir and it should be used for the Ram temple only,” Swamy said.

Swamy is also a petitioner who has sought that the Supreme Court should constitute a bench to hear a batch of petitions challenging the 2010 Allahabad High Court order.

The 2010 order said that there should be a partition of the Ayodhya land between the parties to the dispute.

However, the Wakf Board rejected the apex court suggestion for out-of-court settlement, stating that the case has been in the court for long.

“An amicable solution is impossible. This has to be dealt in the court itself. After all, it is long pending in the court,” Zafaryab Jilani, Convenor of the Babri Masjid Action Committee (BMAC), said.

SQR Ilyas, joint convenor of the Babri Masjd Action Committee, too rejected the SC offer saying saying talks so far have not yielded any results.

Meanwhile, Mohd Iqbal Ansari, appellant in the Babri Masjid Case, said, ”If the matter is sorted with discussion we have no problem.”

The reactions came after the Chief Justice of India (CJI) JS Khehar asked both the parties in the Ram Janmbhoomi-Babri Masjid dispute to resolve their differences amicably outside court and has even offered to mediate.

“Give a bit, take a bit. Make an effort to sort it out. These are issues best decided jointly,” Justice Khehar said.

“It is an issue of sentiment. First sit together and sort it out. Moderators from both sides can hold a meeting,” Justice Khehar said. This was not a judicial order, but just an offer by the CJI.

PM Modi rakes up Agusta case in poll rally, says ‘If Italy court indicts them what can I do?’

At least 43 killed after terrorists attack government building in Kabul

PM Modi reacts to his Pakistan visit, says ‘now I do not have to explain India’s fight against terrorism to the world’