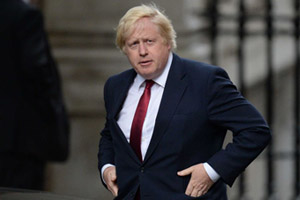 In Boris Johnson, Britain has appointed a liar with his back against the wall as its new Foreign Secretary at a time when somebody reliable is needed in the role, his French counterpart Jean-Marc Ayrault said.

Mr Johnson campaigned successfully for Britons to vote to leave the European Union last month — in France, a founding EU member, he is seen as a key player in the departure and in the setback to European integration it represents.

“I am not at all worried about Boris Johnson, but … during the campaign he lied a lot to the British people and now it is he who has his back against the wall,” Mr Ayrault said.

Meanwhile, Turkish officials have said they would draw a line under disparaging comments made by Mr Johnson about Prime Minister Tayyip Erdogan and the country, warning that relations would be damaged if he repeated such insults.

“His negative comments on Erdogan and Turkey are unacceptable,” the Turkish official said.

“However we’re sure of one thing, that British-Turkish relations are more important than that and can’t be hostage to these statements,” said the official, who requested anonymity due to the sensitivity of the situation.

“With his new responsibilities we are expecting a more positive attitude from Mr Johnson.”

After the vote on June 23, Mr Johnson turned his back on a chance to stand as Prime Minister in place of Conservative David Cameron, who stepped down having led the campaign to stay.

However, on Wednesday Mr Cameron’s successor Theresa May appointed the former mayor of London as her Foreign Secretary, but said Mr Johnson will not be in charge of talks about how the divorce will be arranged.

Ms May named David Davis, a pro-Brexit former Conservative Party leader, to a special ministerial role for that purpose.

‘Maybe the Brits are having us on’

France and other EU partners have urged Britain to trigger quickly the process of exiting the bloc so that a two-year period of talks about trade terms and other links can begin — Ms May has indicated she does not intend to do that this year.

German Chancellor Angela Merkel has thus far refused to comment on Mr Johnson’s appointment, but the German hashtag #Außenminister [foreign minister] has been trending on social media along with jokes related to the new Foreign Secretary.

“When the Germans have found a sense of humour and are taking the piss, you know things are bad,” user @Emzebum wrote.

American political scientist Ian Bremmer also chimed on Twitter: “Maybe the Brits are just having us on. We probably deserve it.”

Nonetheless, the normally soft-spoken former French prime inister Ayrault maintained a strong warning for the new foreign policy chief of his near neighbour.

“I need a partner with whom I can negotiate and who is clear, credible and reliable.

“We cannot let this ambiguous, blurred situation drag on … in the interests of the British themselves.”