Home > Mag Corner > Bouquets and brickbats: winners all at the Sydney Cricket Ground

Bouquets and brickbats: winners all at the Sydney Cricket Ground

Proud to have watched the ICC WC semi-final cricket match between India and Australia live – and the best team won – I can say hand on heart that the journey was more enjoyable than the destination. There was nothing quiet about the Indian fans, many in their fan gear, as they flocked the SCG dancing, chanting and screaming ‘jeetaga bhai jeetega, India jeetega’, including us. A stall set up outside the gates was offering face painting with the colours of the Indian flag, but one look at the serpentine queue and we decided not to wait for our turns and do it ourselves! 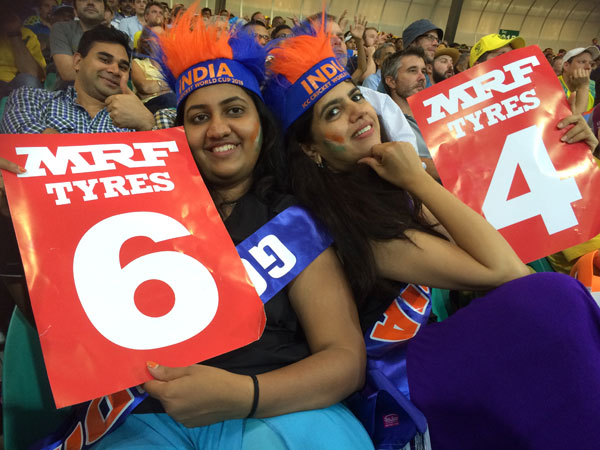 The atmosphere inside the Sydney Cricket Ground was electrifying and fans from both sides were charged up and on the roll as sounds of cheering, clapping, chanting, whistling, music and drums went up in the air every time someone scored a four or a six, fielded well, or got out. There were surprise appearances by Brett Lee and Adam Gilchrist who were welcomed by the crowd with a roaring applause. The camera captured many stellar moments that we could witness on the scoreboard, right from Anushka’s face when Kohli fell, to audience expressions showing a range of emotions based on what they were witnessing on the field. Facebook updates and tweets galore, those not watching the match live asked for an ‘ankhon dekha haal‘, as others looked for us on TV.

I am not an expert in cricket but can safely state that 300+ is a difficult target to chase in a World Cup knock out game, plus losing wickets early took away for India what may otherwise have been achievable if lady luck were by India’s side.

Resultantly the loud sounds of Dhol and drums became less audible as sounds of aussie aussie aussie oi oi oi filled the air more prominently. The sea of blue seemed to be slowly evaporating as a number of Indian fans started to leave the stadium rather early in despair, perhaps not wanting to see their favourite players lose the match. Some spoke of swapping sides in good humour, opting to support Australia instead along the way, while others were in tears seeing their dreams of retaining the World Cup being shattered right in front of their eyes.

Now that it’s all done and over with, one can sit back and look at it in the true spirit of sportsmanship and relish the various moments and emotions that only watching a match live can bring.

To name a few: we were seated in a largely Australian fan dominated section who were sporty enough to give us a high five for no obvious reason on some occasions, and on others cheerfully making room for our frequent exits and returns to and from our seats. While taking a picture waving the Indian flag, a spirited Australian fan smilingly emerged from nowhere to place a yellow Australian cricket cap on my fingers as I displayed the victory sign, just as I hoped the camera would focus on the Indian flag alone. After that initial knee-jerk reaction I could better appreciate the spirit of camaraderie displayed by such a fun and spontaneous gesture. 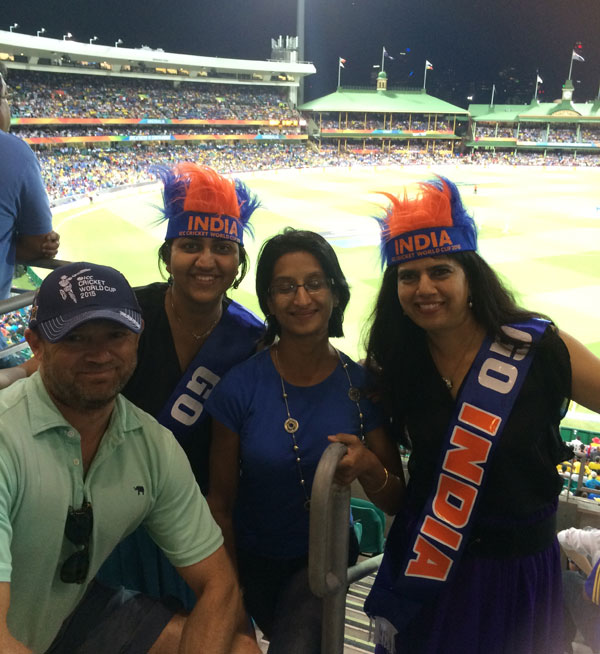 Towards the end of the match, knowing India won’t make it, we wandered around trying to steal a few last minute pictures before leaving. The expressions on the faces of Indian fans had to be seen to be believed. Eyes were sad and an air of resignation was prevalent. We were about to click our last photo of the day. And then an Australian gentleman voluntarily came up to pose with us with a wide grin on his face. Photobombing? I asked him point blank, wondering if he was laughing at us as India was losing the match. However I was eating my words instantly as he pretended not to hear and gladly smiled into my camera. It was a kind smile. What a friendly gesture, even though he could well have enjoyed the Australian team’s moments of glory instead, by keeping an eye on the field. In another part of the stadium, an elderly Indian lady sporting a blue saree walked away slowly, even as the last few overs of Indian batting remained; coming down the stairs with a crestfallen face. We could well relate to her state of mind, and admired her spirit for having shown her support to the Indian team in form of her blue outfit, something typically a younger Indian fan was more likely to do as compared to someone of her age.

The three musketeers: yours truly, Nandini Ganesh and Stuti Aggarwal, finally concluded that we should take India’s defeat in our stride, keep our cool, and move on. As the Indian team’s Captain MSD says, things happen in cricket. Let’s wish the teams from Australia and New Zealand every luck and success in the World Cup finals coming up . 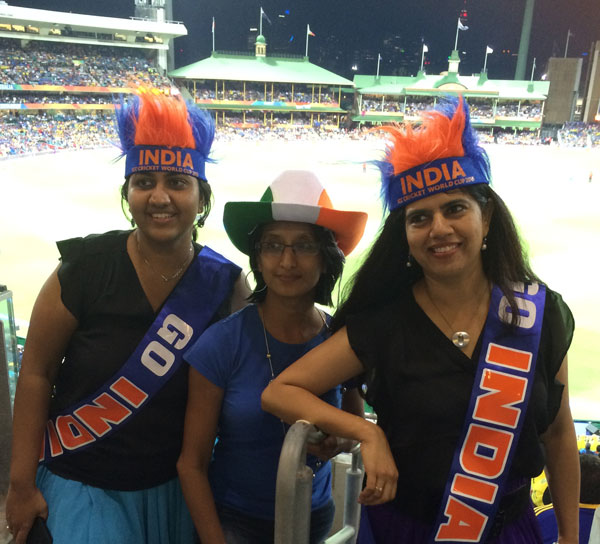