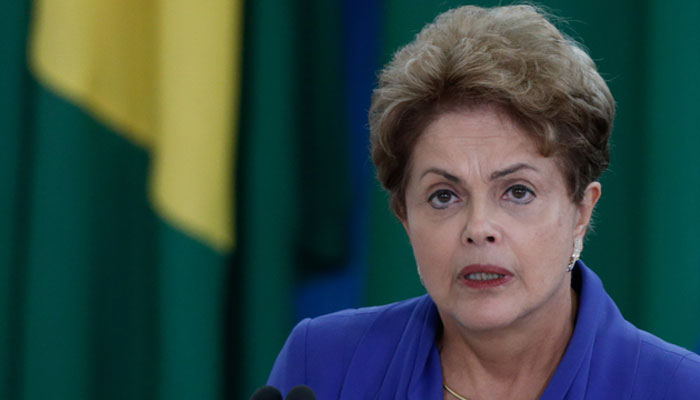 Rousseff, 68, was convicted by 61 of the 81 senators of illegally manipulating the national budget. The vote, passing the needed two-thirds majority, meant she was immediately removed from office.

Cheers — and cries of disappointment — erupted in the blue-carpeted, circular Senate chamber as the verdict flashed up on the electronic voting screen.
Pro-impeachment senators burst into a rendering of the national anthem, some waving Brazilian flags, while allies of Rousseff stood stony faced.

“I will not associate my name to this infamy,” read a sign held up by one senator.

Brazil’s first female president, holed up in the presidential palace on the outskirts of the capital Brasilia with close aides, was expected to make a statement soon after the vote.

Her vice president turned bitter political enemy, Michel Temer, will be sworn as her replacement at about 3:00 pm (1800 GMT).

The veteran center-right politician, whom Rousseff accuses of using the impeachment process to mount a coup, was then to leave for a G20 summit in China.
About 50 leftist demonstrators gathered outside the presidential palace to show their support.

“We are protesting against the coup and fighting for democracy,” said 61-year-old farmer Orlando Ribeiro.

In the center of the capital, extra security and the closing of avenues near the Senate caused massive traffic jams. Police said they were preparing for large protests later in the day.

Rousseff, from the leftist Workers’ Party, is accused of taking illegal state loans to patch budget holes in 2014, masking the country’s problems as it slid into its deepest recession in decades.

She told the Senate during a marathon 14-hour session on Monday that she is innocent and that abuse of the impeachment process put Brazil’s democracy, restored in 1985 after a two-decades-long military dictatorship, at risk.

Recalling how she was tortured and imprisoned in the 1970s for belonging to a leftist guerrilla group, Rousseff urged senators to “vote against impeachment, vote for democracy… Do not accept a coup.”

However, huge anti-Rousseff street demonstrations over the last year have reflected nationwide anger at her management of a country suffering double-digit unemployment and inflation.

The once mighty Workers’ Party, meanwhile, has struggled to stage more than small rallies.

Temer, who was in an uncomfortable partnership with Rousseff before finally splitting, will be president until the next scheduled elections in late 2018.

The 75-year-old, known more as a backroom wheeler-dealer than street politician, took over in an interim role after Rousseff’s initial suspension in May.