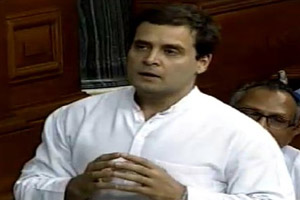 New Delhi: Congress vice president Rahul Gandhi took a complete U-turn on Wednesday over his reported statement in which he had allegedly blamed the Rashtriya Swayamsewak Sangh for Mahatma Gandhi’s assassination.

Senior counsel Sibal made these observations before a bench of Justice Dipak Misra and Justice RF Nariman while referring to an affidavit filed by Gandhi before the Bombay High Court challenging the defamation proceedings against him by a RSS worker.

The bench, while taking note of Gandhi’s statement before the High Court, said that it can dispose off the matter after the Congress leader’s unequivocal statement that he had not blamed the RSS as an organisation for the assassination of Mahatma Gandhi, but only the people linked with it,

However, the court deferred the hearing till September 1 as senior counsel Umesh Lalit, appearing for the RSS worker, wanted some time to take instructions from his client.

Congress vice president Rahul Gandhi had earlier moved the apex court requesting it to quash the defamation case filed by the RSS worker.

In 2014, while addressing a rally in Bhiwandi, Maharashtra, Gandhi had alleged that members of the RSS had assassinated Mahatma Gandhi.

His comment kicked up a controversy, following which Rajesh Kunte, the secretary of Bhiwandi unit of RSS, filed a defamation suit in a Maharashtra court.

Following the suit, he was summoned by the trial court on January 6, 2015. Rahul Gandhi then sought an exemption for appearing before the court and appealed that the case should be quashed.

In May 2015, Rahul Gandhi moved the Supreme Court, seeking a dismissal of the criminal case. Later, on July 19, 2016 the Supreme Court said that making a ‘collective denunciation’ against an organisation is wrong. The SC asked him to either apologise or face trial.

As reported earlier, a bench led by Justice Dipak Misra said, “Why did you make a sweeping statement against the RSS branding everyone associated with the organisation in the same brush? You cannot collectively denounce a group.”

Citing a judgement of Punjab and Haryana High Court, the SC bench said it only says that Nathuram Godse was an RSS worker and added that Godse killed Gandhi and RSS killed Gandhi are two different things.

11 Reasons to Believe in Astrology