Delhi-NCR air quality back to ’emergency’ category, may worsen further 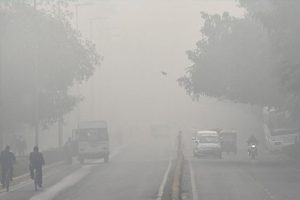 New Delhi: The air quality in Delhi-NCR was back to ‘severe-plus’ or ’emergency’ category towards Monday evening.

Also, the monitoring agencies have forecast a further rise in toxicity over the next few hours.

The international permissible limit for PM2.5 – particles in the air with a diameter less than 2.5mm – is 25 units (microgram per cubic metre), while for India it is 60 units.

Ghaziabad was the most polluted city in the entire NCR, with PM2.5 at an astounding 848 units at 4 p.m – 33 times the safe limit, IANS reported.

The System of Air Quality and Weather Forecasting And Research (SAFAR) initiative of the government said Delhi’s air “may see increase in pollution levels” due to meteorological factors and that a clearer picture would emerge after Tuesday.

On the other hand, the Supreme Court-appointed Environment Pollution Control Authority (EPCA) said Delhi’s air had ‘reversed’ to ‘severe-plus’ or ’emergency’ category after some signs of improvement on Friday and Saturday.

“On Friday (November 10) and Saturday morning, air quality had improved as there was some wind that allowed dispersion of pollutants. But by Saturday afternoon, this situation reversed. Pollution continued to rise and concentration levels have remained in the severe-plus over Sunday,” it said.

However, an EPCA official claimed that the dispersal of pollutants had begun with the wind speed picking up again.

According to the Central Pollution Control Board (CPCB), Delhi’s air quality was above the required limits for over 50 hours by 3.00 pm on Monday.

The ’emergency’ situation was last witnessed from Thursday till Saturday morning.

However, the pollutant levels fell below the red line for an hour on Saturday noon.

Meanwhile, Delhi Minister Gopal Rai said on Monday that scientists in the environment department are “constantly monitoring” the pollution level in the national capital.

“The report for the last 48 hours given by the scientists is that the air quality is fluctuating. The report has been submitted to the chief minister and the Cabinet,” he said, as per PTI.

The application, filed before a bench headed by NGT Chairperson Justice Swatanter Kumar, sought exemption of women drivers from the scheme, saying it may affect the safety and security of women.

It sought that the exemptions be allowed for one year till the government procured 2,000 buses for public transport to tackle lakhs of commuters.

The NGT had on November 11 given a conditional nod to the AAP government’s decision to implement the odd-even scheme for five days from November 13, ordering that no exemption should be allowed to “any person or officer and two-wheelers”.

The government had on Saturday scrapped its plan to implement the odd-even vehicle rationing scheme it had slated to start from Monday, after NGT said there will be no exemption for women, two-wheelers and government servants.