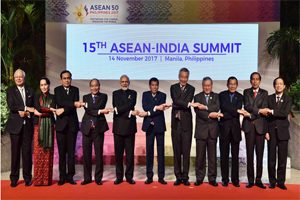 MANILA, PHILIPPINES: Prime Minister Narendra Modi on Tuesday invited the leaders of all 10 ASEAN countries to take part in the 2018 Republic Day celebrations as chief guests. The extension of the Republic Day parade as a diplomatic tool comes at a time when countries in the region are struggling to cope with an increasingly aggressive China.

“India assures the ASEAN of its steady support towards achieving a rules-based regional security architecture that best attests to the region’s interests and its peaceful development,” PM Modi said in his address at the 15th ASEAN-India Summit in Manila.

“I look forward to a befitting culmination of the commemorative year and receiving you at the India-ASEAN special commemorative summit on January 25, 2018, in New Delhi. The 1.25 billion people of India are keen to welcome the ASEAN leaders as our chief guests at India’s 69th Republic Day celebrations. I am committed to working with you to realise our common destiny,” he added.

He also repeated his appeal for all nations to unite against terrorism on a global scale.

This is not the first time that the Modi government has dovetailed the Republic Day celebrations with the chance of a bilateral, or in this case multilateral, summit meet with visiting leaders.

The 2018 Republic Day celebration is likely to see the participation of the heads of state of all 10 ASEAN nations – Indonesia, Malaysia, Philippines, Singapore, Thailand, Brunei, Cambodia, Laos, Myanmar and Vietnam.

This will be the first time at the Indian Republic Day celebrations for Malaysia, Philippines, Brunei, Laos and Myanmar. It will be the third time attending for Indonesia and the second for Singapore, Thailand, Vietnam and Cambodia.