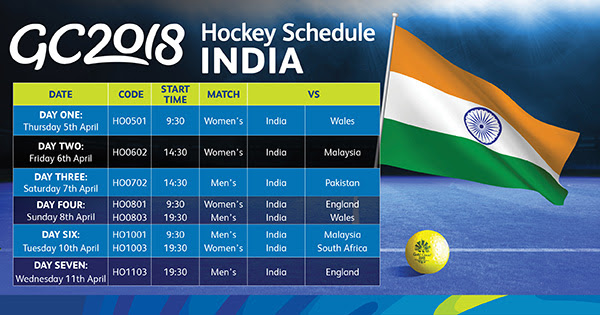 The GC2018 Hockey draw was announced today, revealing an exciting schedule of matches from the very first day of the tournament.

With the Commonwealth boasting some of the world’s best teams – and the fiercest rivalries – the action at the Gold Coast Hockey Centre will be fast, intense and extremely competitive.

India boast a rich history in Hockey, winning medals at each Commonwealth Games since 2002, highlighted by the women claiming gold in 2002 and the men winning silver medals in 2014 and 2010.

At GC2018, the men look to overcome a tough pool including England and Pakistan, as they strive to go one step further in their quest for gold. The women are drawn in a pool that includes England and South Africa, as they aim to repeat their gold medal success from 2002.

GC2018 Hockey tickets are selling fast, including the semifinal sessions. With adult tickets from $20 and children’s from $10, don’t miss your chance to be part of hockey history.

Group tickets in an ‘India bay’ are available for India v Pakistan, Saturday April 7 – to express your interest email tickets@redelephantgroup.com

Get in quick to secure seats to support your team play! Tickets are available on a first-come, first-served basis via gc2018.com/tickets