Harassment, Scandal and the Media: Is a Hollywood Witch Hunt Brewing? 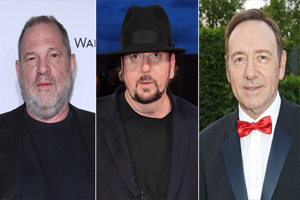 Journalism is at its best exposing wrongdoing, and at its worst repeating unverified allegations.
In the early 1980s, Los Angeles was engulfed in scandal. After the mother of a young child claimed her son had been sodomized by a staff member at his school, other parents came forward with increasingly lurid allegations. Not only had one kid been violated, it was said, but so had dozens of others. And it wasn’t just an isolated staffer who was responsible; rather, half a dozen teachers and administrators had perpetrated the most heinous sex acts, some involving small animals, others satanic rituals. There were tales of secret underground tunnels and witches on broomsticks. The revelations seemed endless and apocalyptic. And they were repeated ad nauseam by a too-willing press.

Dozens, if not hundreds, of reporters were assigned to cover the story, one tumbling over the other in the race to break news. Here in Southern California, in suburban Manhattan Beach — in the very place where children should have felt safest — they were in grave danger, we were told. And if these kids were in danger, how many others must be, too? We started looking around with a newfound fear. Friends became strangers, strangers became enemies, enemies became potential perverts lurking in our midst, ready to do inconceivable harm. Terror swept through middle-class families just as ferociously and devastatingly as the fires that have recently decimated Santa Rosa.

And yet none of it was true.

After years of investigations and multiple trials, not a single person connected to the McMartin preschool scandal (as the case was known) was ever found guilty, though many of the accused had their lives left in ruins. One alleged culprit, Ray Buckey, endured two separate trials, and both ended in hung juries, after he’d spent five years waiting in jail. David Shaw won a Pulitzer Prize writing about how rumor turned to revulsion for The Los Angeles Times; but even today, many of us question whether “not guilty” was the same as “innocent.”

The media didn’t cover itself in glory back then. Where were the reporters who stuck to that tried-and-true principle, that one is innocent until proven guilty? Where were the voices crying out that these fables of witches and warlocks, dungeons and devilish rites, didn’t pass the sniff test? They remained silent, almost without exception. In my three decades as a journalist, I’ve never experienced anything like it.

Since the Harvey Weinstein scandal broke three weeks ago, thanks to some stellar reporting by The New York Times and The New Yorker — bolstered by a cascade of reports from other publications, including this one — not a day has gone by without another mind-boggling story. From James Toback to Kevin Spacey, from Brett Ratner to Dustin Hoffman, from political commentator Mark Halperin to NPR news chief Michael Oreskes — there have been countless tales of horrendous behavior, the sort one had hoped to see vanish decades ago. In their zeal to ferret out the guilty, journalists are reacting to past errors, and to a time when our unwillingness to investigate allegations gave rise to the culture of secrecy in which Weinstein’s band of brothers could thrive.

And these stories are just the tip of the iceberg. Even now, my colleagues here and elsewhere are on the hunt, chasing hundreds of tips about harassment in many and varied forms — male upon male, male upon female, verbal, sexual, you name it. And I’m delighted. It’s wonderful to see reporters tackling a subject of real significance and society-changing potential. They’re doing what journalists are meant to do: comforting the afflicted and afflicting the comfortable.

That said, may I confess that I’m scared?

I’m terrified that, in our righteous quest to do good, we’re sweeping up the innocent as well as the guilty. We’re accepting allegations in the place of solid proof. We’re conflating those guilty of more minor crimes with perpetrators of egregious and even criminal behavior.
Journalists have a responsibility to stand firm, to not get swept up in the rush to judgment or the race to break a story, remembering that some of the most incendiary material — just like the McMartin allegations — may turn out to be less combustible than it seems. There’s a lot more fire behind the smoke today than there ever was in the McMartin case — the proof: Halperin, Spacey and others’ tentative apologies — but that doesn’t mean smoke is always accompanied by fire.

And yet most journalists are rushing forward without pause. And in doing so, they’re increasingly stretching the limits of what’s acceptable to report, breaching the thick wall between gossip and fact.

That’s a real shift. For years, it was inconceivable to print such damning reports without having iron-clad facts, or without giving both sides a chance to air their stories. But all that has altered in the course of three weeks. Faced with white-hot competition, we’re giving up tried-and-tested codes of conduct, knowing that if we don’t, we’ll lose the battle to get the story first.

We in the media are not verifying and re-verifying the facts, but only checking that so-and-so did indeed say such-and-such — not always even on the record.

In the short term, this has allowed the exposure of appalling behavior, which will have a chilling effect on anyone who plans to indulge further. But in the long term, it poses huge perils for the media. We risk eliminating the barrier that has separated legitimate news from the illegitimate, erasing the thin line that has kept us on a different plane from the TMZs and National Enquirers. In doing so, we’re giving catnip to our critics, those eager to lambast us for bias and “fake news.”

And we’re not just damaging the possibly innocent; we’re damaging ourselves.