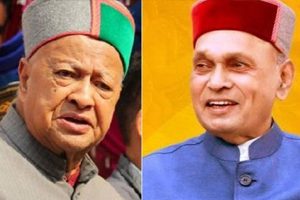 SHIMLA: The Bharatiya Janata Party is confident of scoring a massive victory in Himachal Pradesh Assembly elections, expecting at least 60 out of the 68-seats in the hill state.

“We aimed to get 50 plus seats but now that we are receiving so much support from all sections of the society, we expect it to cross 60,” said Prem Kumar Dhumal, BJP’s Chief Ministerial candidate from the hill state.

With promises of development and safety, Dhumal is eyeing his third chief ministerial tenure in the state.

Supporting the senior leader, Anurag Thakur, a BJP MP from Hamirpur, said, ”The time has come. People have made up their mind to get rid of Congress who has looted Himachal Pradesh. The state needs a senior leader like Dhumal ji to look at the affairs of Himachal which is under the debt of more than Rs 50,000 crore.”

Congress, too, is confident of winning the state polls.

“Confident of getting the majority in the election. The next Government too will be of Congress,” said the incumbent chief minister Virbhadra Singh.