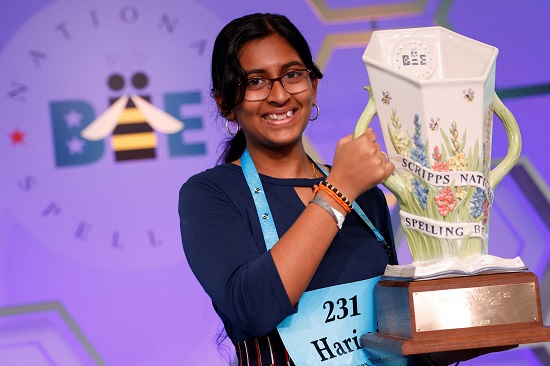 Harini Logan, a child of Indian descent, won the Scripps National Spelling Bee in 2022 on Thursday.
The Texas Class 8 kid won the tournament by properly spelling more words in a spell-off, the Bee’s first since its founding in 1925.

Men of Indian Origin given Top Jobs at Multinational companies

The Spelling Bee had its difficult moments, according to USA Today, when both participants failed to correctly spell two words in a row between Rounds 13 and 18.
According to the source, this prompted the judges to chose a spell-off, which is a 90-second round in which contestants must accurately spell as many words as possible.

Ms Logan properly spelt 21 words while her opponent only managed 15, resulting in her victory.

Ms Logan, 14, had a heart-stopping moment when she was ousted in the finals, according to the New York Times.
The judges, however, later concluded that her definition of the word pullulation was permissible.

According to the New York Times, this was Ms Logan’s fourth and final appearance in the Bee, and she described the victory as “surreal.”

After the three-hour competition, Vikram Raju, 12, stood with his head bent.
However, when host LeVar Burton asked if he will return to the Bee next year, he responded with a resounding “yes.”

The National Bee is as much a nerd spelling competition as it is a high-profile, high-pressure endurance test, and spellers spend months preparing for it.

Due to the coronavirus pandemic, the Bee was cancelled in 2020 for the first time since World War II.
In 2019, however, there were eight co-champions, with seven of them being Indian Americans.