Minister for Tourism and Major Events Kate Jones, the Hon. Steven Ciobo MP, Minister for Trade, Tourism and Investment, Mayor of the City of Gold Coast Tom Tate, Consular Dignitaries and Community Leaders representing seven countries and Badminton Australia officials  came together at Southport Broadwater Parklands to announce the 32 countries that will compete for top honours at the globally-celebrated Total BWF Sudirman Cup 2017.

Children in traditional dress – representing some of the biggest badminton nations globally – were also on hand to celebrate the world team championships of badminton coming to Australia for the first time in the Sudirman Cup’s 25-year history. 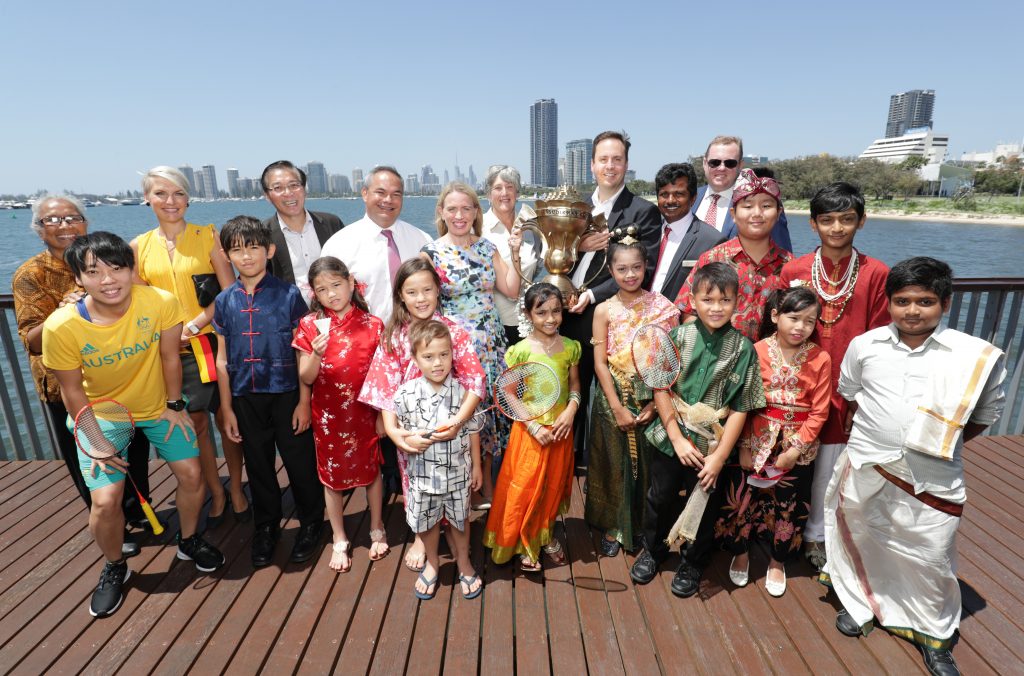 India had been confirmed to compete and Mr Palanichammy O Thevar, President said, “The Federation of Indian Communities of Queensland Inc. (FICQ) is proud to support the Total BWF Sudirman Cup 2017. India is ranked one of the top 20 badminton countries in the world and we encourage Indian communities in Queensland and Australia to support Team India for this historic event.” 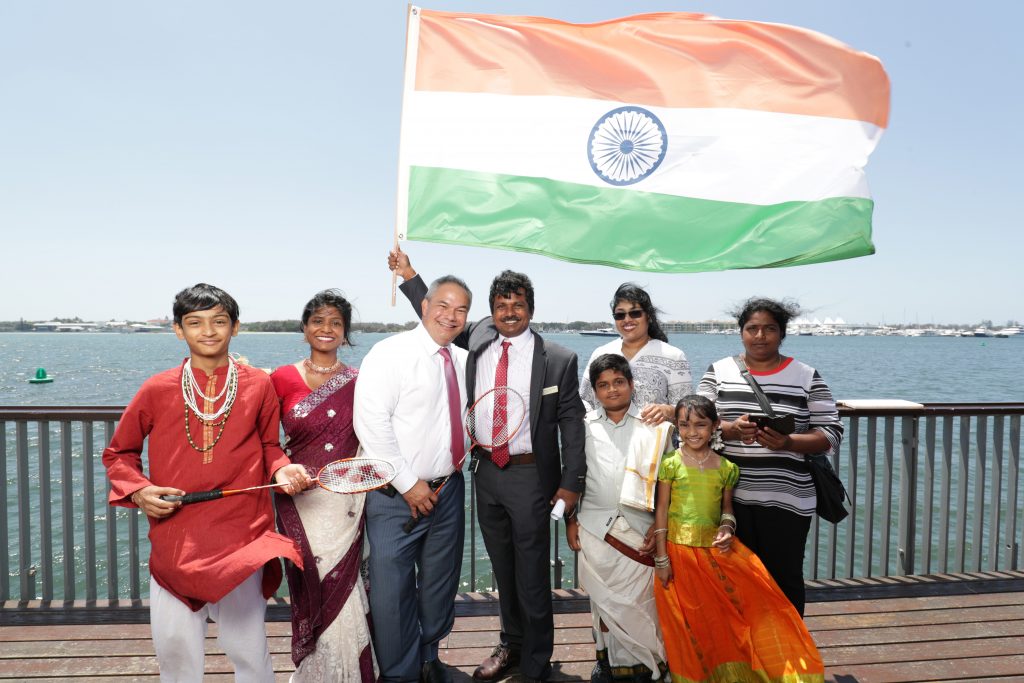 The TV broadcast for the Sudirman Cup will see the hugely popular event watched by more than 500 million households globally, with badminton ranking as the world’s second most popular sport – just behind soccer.

Minister Jones said the event would deliver a significant economic boost and international exposure for the Gold Coast.

“We are looking forward to hosting the Sudirman Cup 2017 and the BWF annual general meeting on the Gold Coast in May,” Ms Jones said.

“Together, these two events are expected to inject around $10 million into the local economy – which is good news for Gold Coast businesses and jobs.

“Hosting world-renowned events like this also allow us to showcase Queensland to a global audience, drive international and interstate visitor nights and grow the State’s economy.

“With many of the world’s top badminton countries travelling to the City to compete in this championship event, it will be an excellent prelude to the upcoming Gol Coast 2018 Commonwealth Games. 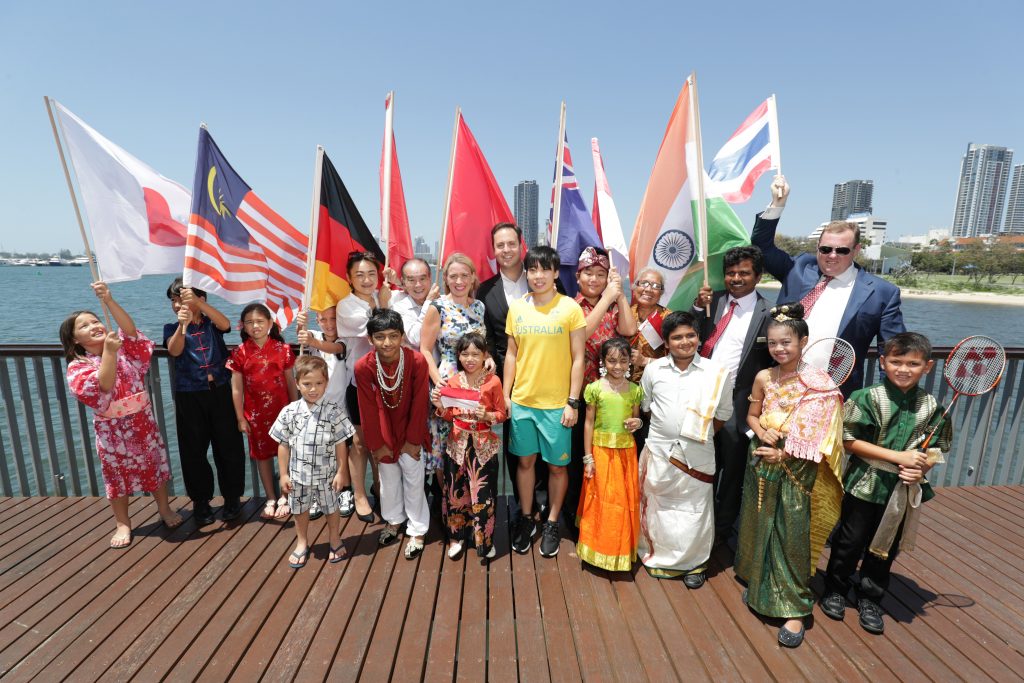 “Through Tourism and Events Queensland, our Government is continuing to work hard to attract world-class events which deliver the best tourism outcomes and exceptional value for the people of Queensland.”

“This event will attract more than 1,500 competitors from over 30 countries and a global television audience of more than 500 million, cementing the Gold Coast’s reputation as a premier destination for hosting sporting events.

“This is the first time the Sudirman Cup has been held in Australia. It’s an opportunity to showcase to the world that the Gold Coast has it all – stunning beaches, unique nature and wildlife, a vibrant food and wine scene and, of course, world class events.”

Official guests had the opportunity to get an up-close look at the one-of-a-kind Sudirman Cup trophy. The replica shuttlecock gold-platted trophy stands at an impressive 80cms tall and is located on the Gold Coast as the countdown to the week-long event swings into motion.

The Sudirman Cup will be staged from May 21-28 at the Gold Coast Sports & Leisure Centre, the new sporting precinct for the Gold Coast 2018 Commonwealth Games™ (GC2018). It will be the first major event held at the Centre before GC2018.

Gold Coast Mayor Tom Tate said he hoped locals and interstate visitors would support the event and create an exciting atmosphere at the new sports centre.

“This is a unique opportunity for us to show our community spirit and our enthusiasm for sports – to a television audience of 500 million – so let’s all become badminton fans and put the Gold Coast on the map,” he said.

“Tickets to the Sudirman Cup 2017 are on-sale and already selling fast. And with this announcement of all the countries participating, we’re expecting another surge in ticket sales and for the finals event days to sell out quickly. The Sudirman Cup is the premier badminton team event globally and we’re very proud that Australia – which is not generally considered to be one of the world powerhouses of the sport – is set to host it. It says a lot about the calibre of our facilities and the draw of the Gold Coast as a desirable destination that we’re hosting the tournament in Australia for the first time ever,” added Geraldine Brown, President, Badminton Australia.

Tickets for the Total BWF Sudirman Cup 2017 are on-sale now and available at: http://premier.ticketek.com.au/shows/show.aspx?sh=SUDIRMAN17

Know the New India! – India Fellows Programme 2016 at the Indian School of Business