The Indian Support Centre Inc (ISC) has just completed two years. To celebrate the successful completion of its two years since incorporation in March 2015, the ISC organised a Fund Raising Event on 4th June 2017 at the Parramatta Town Hall, Parramatta.

The function was started with traditional lighting of lamp by the Hon David Clarke, MLC, Parliamentary Secretary for Justice representing The Hon Gladys Berejiklian –
the Premier of NSW, Dr Hugh McDermott – Member for Prospect representing the Hon Luke Foley, Leader of the Opposition, and Mr Mark Taylor – Member for Seven Hills representing the Hon Ray Williams MP and Minister for Multiculturalism and Disability Services. This was followed by national anthem of Australia followed by the National Anthem of India.

The event was well attended by about 300 people. While welcoming the guests Mr Subba Rao Varigonda, President said – “No one wants problems in life. However when we hit problems we need someone to share with, and if the problems are too hard to solve, we may even require a shoulder to cry. In our adopted country, where we made Australia as our home, you simply don’t know which door to knock at, to share our problems and possible seek resolution. The Indian Support Center was established in March 2015-with this clear objective in mind. Today the ISC supports new migrants arriving into Australia from the Indian Sub-continent, People who are long term unemployed and seeking jobs after arrival into Australia, people having family feuds and often ending into domestic violence, accidental deaths on roads with bodies to be flown back home, people having issues with passports and Visas for travel to India and other areas”.

After the welcome speech by the President, The Hon David Clarke, MLC and Parliamentary Secretary for Justice spoke very highly of India, and India’s contribution to the world – in particular to the Australian economy. He congratulated the Indian Support Center for its excellent contribution to the community and went on to say – “it is a tribute to the ISC that it is becoming financially self-sufficient after the initial seed capital grant from the Government of NSW 2015. At the end of his speech, the guests gave a standing ovation, while appreciating his speech. After his speech, the Hon David Clarke released the special issue of a souvenir magazine marking ISC’s 2nd Anniversary Fund Raising event.

After the speech by the Hon David Clarke, Subba Rao Varigonda welcomed Dr Hugh McDermott to the stage to address the gathering. While welcoming Dr McDermott, Mr Varigonda quoted from Dr McDermott’s maiden speech in the NSW Parliament about his seat of Prospect – “We are a melting pot of people from across the planet: Tamils, Assyrians, Italians, Lebanese, Indians, Filipinos, Maltese, Eastern Europeans, Irish and Anglo-Celtic Australians, to name but a few of the successful multicultural mix in Prospect. It is great that we are all Aussies, we are all Australians” and went on to say that “This shows how much he recognises and is committed to multicultural Australia!”. In his speech Dr Hugh McDermott spoke passionately about ISC’s contribution to the Indian subcontinent community in NSW. In particular he cited the support and assistance given to a Srilankan family when one young boy died while under the custody of NSW Corrective Services in Long Ba jail. After concluding his speech, Dr McDermott inaugurated the release of “the Subcontinent Voice” , a magazine that truly represents the voice of the migrant community from people across the Indian Subcontinent. Dr Chandrika Subramanian, Editor for the TSV and Lynda Vij, the financial partner for the magazine assisted in the release of the magazine.

Earlier the program got off to an excellent start by a display of Yoga exercises by the members of the Happy Thoughts group and this was followed by some excellent songs by the well-known singer Ms Shoba Ingleshwar. The Nartan Institute of Performing Arts presented an excellent Bollywood dance performances – both by children and senior girls that was highly appreciated by the guests. The entire backstage was well orchestrated by Arunesh Seth and Ms Jaspreet Chopra. Thanks to Dipak Padhiyar and the young volunteers he brought in – they had assisted in laying of the chairs for 300 guests for the start and taking them off after the function and cleaning up the hall.

Haveli @ Harris Park provided excellent food for the evening. Dr Sangeeta Garg proposed vote of thanks. In particular she expressed sincere thanks to ISC’s our Platinum Sponsors – the Subcontinent Voice, Gold Sponsors – the Radhe Group, Bronze Sponsors – the CVFR Group and other sponsors – State Bank of India, Bank of Baroda, RD Cleaning Services, Famous Kitchens, Green and Gold and others, for the evening. 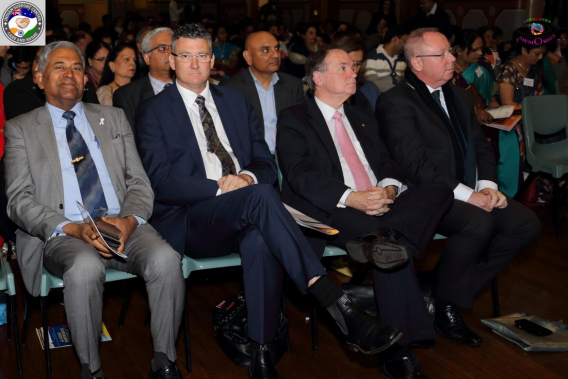 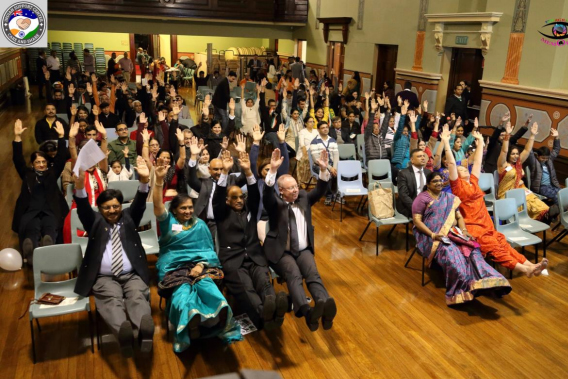 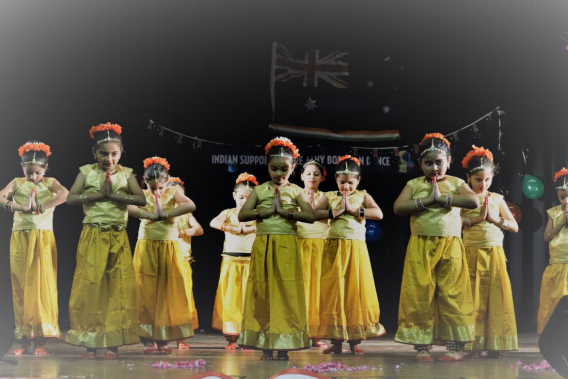 If you have seen Nooran Sisters performance on TV or Live