India lifted a record-extending fifth ICC U19 World Cup title after defeating England in the final at the Sir Vivian Richards Stadium in North Sound, Antigua on Saturda 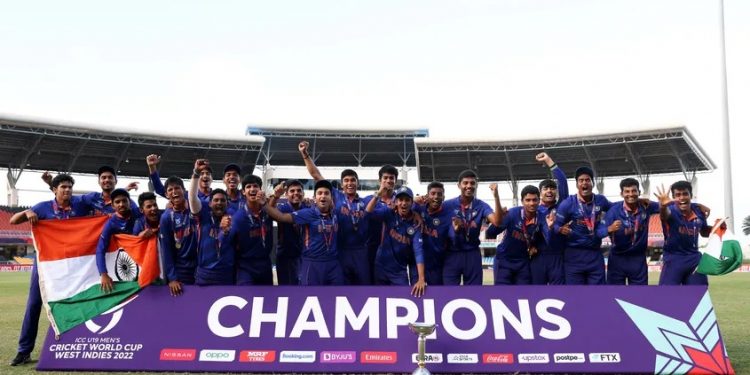 India lifted a record-extending fifth ICC U19 World Cup title after defeating England in the final at the Sir Vivian Richards Stadium in North Sound, Antigua on Saturday. The Yash Dhull-led side defeated the Three Lions in the summit clash by four wickets. Earlier, India had won the U19 World Cup in 2000, 2008, 2012, and 2018. Chasing 190, India got off to the worst start possible as Joshua Boyden dismissed Angkrish Raghuvanshi (0) on the third ball of the innings. Harnoor Singh and Shaik Rasheed then got together at the crease and the duo put on 49 runs for the second wicket. As soon as India started to gain an upper hand, England stormed right back into the contest in the 18th over as Thomas Aspinwall dismissed Harnoor (21), reducing India to 49/2. 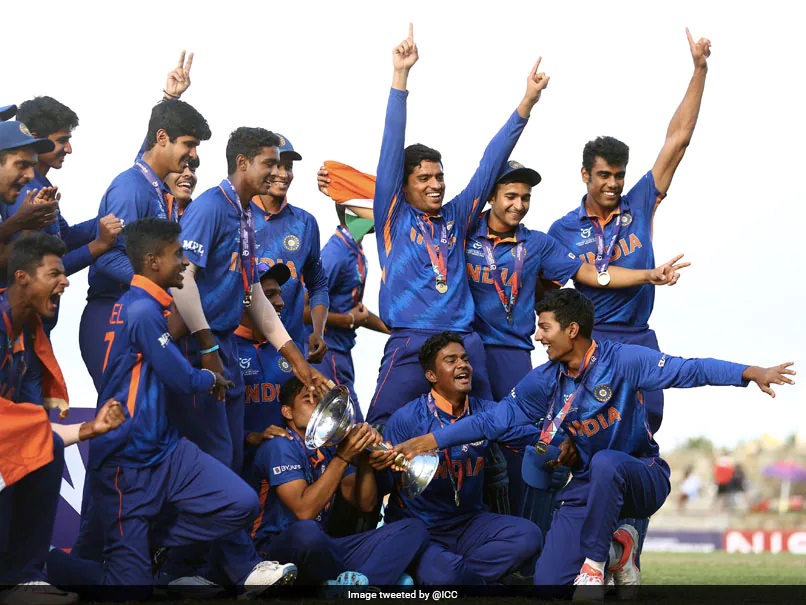 Skipper Yash Dhull next joined Rasheed in the middle and both batters stitched together a partnership of 46 runs which saw Rasheed (50) going past his 50-run mark. However, as soon as he reached the milestone, he ended up giving his wicket away to James Sales. In his next over, Sales picked up the scalp of Dhull (17), and India was reduced to 97/4, still needing 93 runs for the win.

Raj Bawa (35) and Nishant Sindhu (50*) then ensured that India does not lose wickets in a cluster. In the end, India registered a four-wicket win to lift the U19 World Cup for the fifth time.

Earlier, Raj Bawa scalped five wickets while Ravi Kumar took four as India bowled out England for 189 inside 45 overs. England crumbled in the first half of the innings before James Rew’s gutsy 95-run knock helped the Three Lions reach a score of more than the 180-run mark.

Opting to bat first, England got off to the worst possible start as left-arm pacer Ravi Kumar picked two wickets (Jacob Bethell and Tom Prest) in the first four overs. George Thomas and James Rew tried to get the partnership going but Raj Bawa dismissed the opener as India took control over the game.

England kept losing wickets at regular intervals and was soon found reeling at 61-6 in the 17th over. Meanwhile, James Rew kept fighting hard and scored a fifty to rescue his side from the precarious position. Rew and James Sales put up a fifty-run stand to revive England’s innings. However, Rew fell five runs short of a century as Ravi Kumar removed him in the 44th over.

Rew’s wicket triggered a collapse and England lost the final two wickets to set a 190-run target for India in the final.

Despite a tough tournament off the field that saw multiple players contract COVID-19 including their captain and star batter Dhull, the Indians remained undefeated and redeemed themselves after their loss to Bangladesh in the 2020 final.

South African batter Dewald Brevis was named player of the tournament for his record 506 runs that included two centuries.

This Sexy Photoshoot Of Ranveer And Vaani Will Make You Sweat Because Of Its HOTNESS!