Meaning of Planetary Aspects in Astrology: 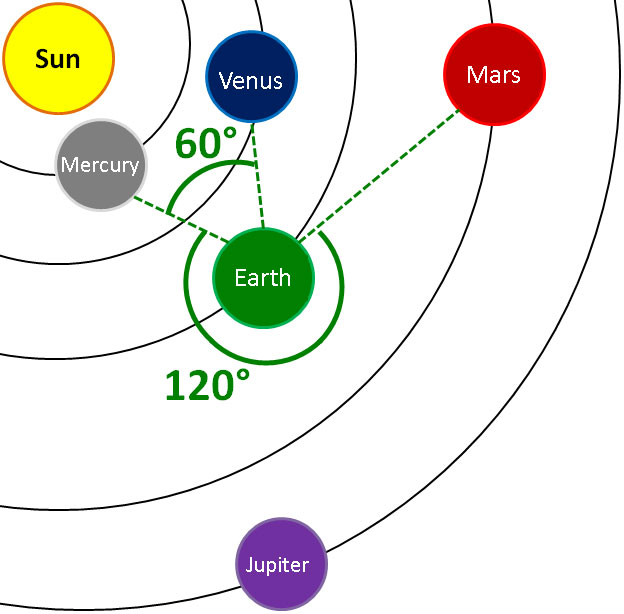 Each planet in Vedic astrology has a special meaning when they aspect a house or planet. They exert a certain kind of influence upon them. Below are planets and the meaning of their aspect.

Sun: When the Sun aspects, it shows straightforward direction. It gives an authoritative influence upon the planet or house. It can show where the person will have responsibility, and give clear direction without wasting time.

Moon: The Moon’s aspect on other planets and houses shows a sense of comfort and welcoming nature. Such an aspect will give a kind and motherly influence filled with emotions.

Mercury: Aspect from Mercury shows where we like to engage, communicate, and gather information. It makes the planet or house a source of networking, communication, and knowledge with analytical skills.

Venus: Venus’ aspect on other planets and houses gives a pleasant feeling and desire. We gain a strong sense of finding happiness from those things.

Mars: Mars aspect shows a straight shooter. The planet or house becomes a direct type of environment. They want to take actions towards those things which are aspected by Mars. They are straightforward with aggressive behavior.

Jupiter: Jupiter’s aspect shows where we feel the need to learn and grow as an individual. It shows our desire to achieve a higher level of knowledge in our physical and spiritual life. Jupiter is known as “blessings from the sky.” Jupiter’s aspect saves a planet from giving negative results. It either neutralizes the negative result, or reverses it into positive territory. Jupiter’s ability to expand can increase the positive or negative feeling of the planet.

Rahu: Rahu’s aspect shows where we need to expand, conquer, and achieve. In relation to aspect, Rahu acts like Mars. It has an obsession with things that it aspects, and it must achieve its goals to fulfill its hunger. The reason why Rahu is truly like Saturn is because it brings fear towards those things as well. Rahu puts a wrapper of illusion or foreign element upon the planets he aspects or the houses he aspects. Foreign element simply means things we do not understand or are unfamiliar with.

Ketu: Ketu’s aspect on planets show a sense of separation and a desire to get away. Since Ketu shows our mastery over the things we have already accomplished in past lives, its conjunction, placement, and aspect shows where we feel the least amount of responsibility. At the same time, one has the ambition to experience those things again.

Rahu and Ketu are illusionary planets, or better eclipse points of the Moon. Below is their aspect which is similar to Jupiter.

Bouquets and brickbats: winners all at the Sydney Cricket Ground

The Team @Canberra India Council talks to @ Rajni Ghai Malhotra of DesiCanberra.com about their upcoming event “India In The City” at National Multicultural Festival 2019 in Canberra on 16th Feb 2019.

Secret spots in coastal Karnataka to explore on your next sojourn

Amitabh Bachchan shares how he spent time as he battled Covid-19: ‘Replied to people on Twitter, watched a documentary that I won’t name’