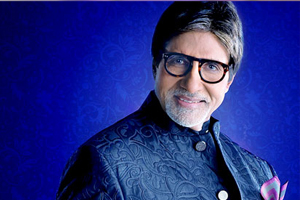 Conquering new peaks has become a habit with this trouper. On 15TH February, Amitabh Bachchan created history by doing a live cricket commentary at the India-Pakistan one-day match.

Tell him he is the talk of the nation for displaying his gaming spirit in the baritone and Big B protests, “No. I am not the talk of the nation even though I did talk to it for the India v/s Pakistan World Cup 2015 game in Adelaide. The commentary was a part of a promotional activity for the film Shamitabh. Since the story in the film was dependent upon the ‘voice’ of Amitabh Sinha, the character I play, Balki felt it would be nice if ‘voice’ could be a symbol of connect with the listeners of the Cricket match.”

Big B displays his legendary modesty by saying he is not qualified for the role of the cricket commentator. “I am not qualified for the job at all, but being in the company of legendary greats such as Kapil Dev, Rahul Dravid, Shoaib Akhtar, Arun Lal was a privilege. I loved the process, the technology that goes into such a moment and the television production efforts that go into reaching out to the audiences worldwide.”

When I ask him if he considers his voice his greatest asset, Amitabh Bachchan concedes, “Physically and metaphorically too, the voice of every human is their greatest asset. Not being able to speak or express in sound is a deep handicap – for actors more so! An actor has to be accomplished in many qualities, and yes, voice is one of them. My greatest asset is the continued love from well-wishers. That is all encompassing.”