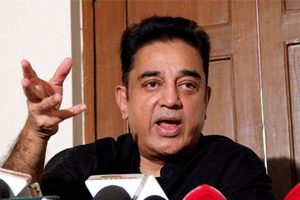 “There is no going back,” actor Kamal Haasan said on Tuesday firmly stating that he will soon begin his political career. There were speculations that he will launch his party today on his birthday but the actor said that groundwork needs to be done before making any announcement.

“Many speculating that today I will announce the political party. I have to do a lot of groundwork, we have been sitting and analysing,” he said.

The Tamil superstar will launch a mobile application to get in touch with his fans. “This app will be a sort of a whistleblower platform, will be used wherever wrong happens. Will strive to achieve justice,” he said.

Optimistic about his party, he said that the people of Tamil Nadu want change which is probably why they will follow him. “Looking at the larger goal, longer time, have to make the party ready for it. Working on the structural part,” he said.

He also clarified his recent statement on ‘Hindu terror’ stating that the word he used was ‘extreme’. “I definitely don’t want to hurt Hindu sentiments as I myself belong to a Hindu family, but have taken a different path,” he added.