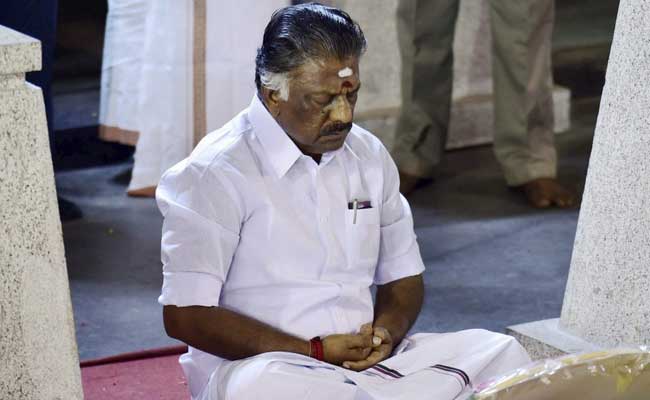 Chennai: Even though Eddapadi Palaniswami has been sworn-in as Chief Minister, the succession war in the AIADMK appears to be far from over. The Panneerselvam camp hit back at the official faction of the party by ‘sacking’ VK Sasikala as general secretary and her nephew TTV Dinakaran as the deputy general secretary.

The orders to sack the duo from the primary membership of the party was issued by former party Presidium Chairman E Madhusudanan. He was dismissed by Sasikala after he joined the Panneerselvam camp; he had then questioned Sasikala’s powers to dismiss him.

A statement issued by Madhusudanan said that Sasikala was dismissed as she was bringing disrepute to the party.

Besides Sasikala and Dinakaran, Madhusudhanan also sacked S Venkatesh, another member of the Mannargudi clan, who had become active in the party after the demise of J Jayalalithaa.

He said Jayalalithaa had earlier (in 2011) expelled them from the party for “betraying” her.

“Their re-induction, done without any authority, is being cancelled,” he said.

Yesterday, Panneerselvam had vowed to dislodge the new government headed by Palaniswami.

He alleged that the new government will remain loyal to Sasikala and her family and hence needs to overthrown.

The former chief minister also announced that he and his supporters will carry out rallies in all 234 constituencies in the state and garner people’s and party cadre’s support for removing Sasikala and her family from the party and Amma’s residence Veda Nilayam in Poes Garden, Chennai.

The dismissals came a day after Sasikala loyalist Edappadi Palanisamy was sworn in as the 13th Chief Minister of Tamil Nadu, along with 31 cabinet ministers, ending the political crisis sparked by the death of Chief Minister J.Jayalalithaa in December.

Edappadi K Palaniswami, a VK Sasikala loyalist, was yesterday sworn-in as the Chief Minister of Tamil Nadu, ending the 10-day political uncertainty in the state which began with caretaker CM O Panneerselvam’s revolt against the AIADMK general secretary.

Governor C Vidyasagar Rao administered the oath of office and secrecy to 63-year-old Palaniswami, a party veteran from western Tamil Nadu, at the head of a 31-member Cabinet at a ceremony in the Raj Bhavan this evening.

The ministers were sworn-in in batches.

Palaniswami is the third AIADMK leader to be sworn-in as Chief Minister in the last nine months. AIDMK supremo and Chief Minister J Jayalalithaa had powered the party to a rare successive term in office in the state in the May, 2016 Assembly Polls. She continued in the post through her grim 74-day battle for life.

Within hours of her death on December 5, Panneerselvam, who had filled in for Jayalalithaa twice in the past when she had to go to jail in corruption cases, was sworn-in as Chief Minister.

Panneerselvam later stepped down, paving the way for Sasikala, who was already chosen AIADMK general secretary, to be elected its legislature party leader on February five.

However, the usually reticent Man Friday of Jayalalithaa rose in rebellion against Sasikala two days later, claiming he was coerced into resigning. He even expressed willingness to become Chief Minister again if the people of Tamil Nadu and AIADMK workers so desired.

His belligerence plunged the state into a political crisis.

Amid the face off with Panneerselvam, Sasikala met Governor Rao on February 9 and staked claim to form the government.

Notwithstanding criticism from several quarters, Rao preferred to wait and watch as the political tug-of-war played out between the rival AIADMK factions.

He stood vindicated when Sasikala and two members of her family were convicted and their sentences restored by the Supreme Court in a disproportionate assets case on February 14, rendering her ineligible for contesting elections for 10 years and dashing her hopes of becoming the Chief Minister.

Sasikala then handpicked her loyalist Palaniswami, who was elected AIADMK legislature party leader, and staked claim to form the government on Tuesday.

‘A for Apple, B for Bomb’ – How Islamic State groomed child soldiers

'A for Apple, B for Bomb' - How Islamic State groomed child soldiers

When COVID-19 hits family back home