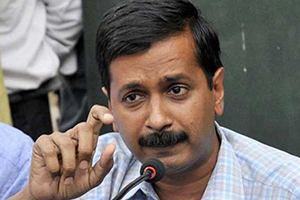 Delhi: Hours after the BJP released copies of BA and MA degrees of Prime Minister Narendra Modi in response to Aam Aadmi Party’s allegations questioning his degree from Delhi, Arvind Kejriwal tweeted saying that CIC order should be implemented and inspection allowed.

Meanwhile, in a bid to set at rest the row over PM Modi’s educational qualifications, BJP president Amit Shah and Union Finance Minister Arun Jaitley addressed a press conference where they released the graduation degree taken from Delhi University and the masters’ degree from Gujarat University.

The two leaders launched a blistering attack on AAP leader and Delhi CM accusing him of lowering the public discourse by spreading “lies” and substituting governance with “politics of adventurism”.

They demanded an apology from him.

Shah and Jaitley alleged that Kejriwal has tried to turn a “lie” into truth by running a campaign to mislead the people of the country.

Jaitley said the kind of allegations that have been levelled against Modi threatens “federal polity” in the country when a Union Territory indulges in “irresponsible behaviour” to attack the Prime Minister. They challenged the Delhi Chief Minister to verify his claims.

“Arvind Kejriwal has been spreading lies about the Prime Minister’s credentials. He has committed the sin of defaming the country. It is very unfortunate that we have to hold a press conference about the Prime Minister’s educational qualification. When you do not have any proof, how can you spread allegations. He should apologise to the entire nation,” said Shah, adding he will also write a letter to Kejriwal to satisfy his queries, as per PTI.

When asked about the authenticity of Modi’s BA degree, Shah told a reporter to check it with the Delhi University.

Kejriwal has been alleging that the Prime Minister’s BA degree is fake and that it was obtained by a namesake of him from Alwar.

Shortly later, however, an unfazed AAP continued to persist with its claims on the issue.

AAP leader Ashutosh addressed a press conference in which he claimed PM Modi’s name does not match in the BA mark sheet and that of the MA degree and even claimed that there were discrepancies in the year of passing as well.

He said there were discrepancies in the PM’s name even at the BA level with it being recorded as ‘Narendra Kumar Damodardas Modi’ in one of the mark sheets while it was spelt as ‘Narendra Damoderdas Modi’ in the degree certificate.

Even in BA mark sheets, another AAP leader Dilip Pandey said, surname is spelt “Modi” in one case while it changes to “Mody” in another.

China landslide: Bodies pulled from under tonnes of earth in Fujian province

China landslide: Bodies pulled from under tonnes of earth in Fujian province