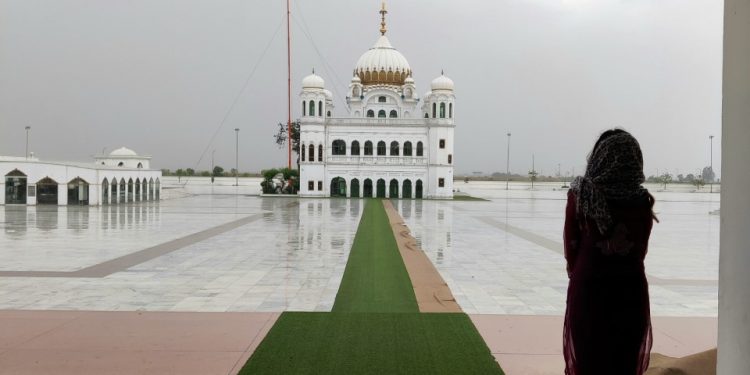 A short and sweet holiday in India had been long time in coming. What I didn’t know that it would turn out to be one of the most memorable one for us.

Gurudwara Sri Ber Sahib, at Sultanpur Lodhi situated on the bank of the rivulet Kali Bein was the first leg of out pilgrimage. Guru Nanak Dev Ji, the first Guru of the Sikhs performed his morning ablutions in the Bein and then sat under a ber tree to meditate. Guru Ji meditated at the thumbh for 14 years, nine months and 13 days. It was during one such ablution that Guru Nanak had what is described, in the Janam Sakhis, as a direct communion with the Divine. One morning Guru Nanak Dev Ji disappeared into the stream and was not seen for two days. When he reappeared at a spot, 2 km upstream, now known as Sant Ghat, the first words he uttered were, “No one is Hindu, no one is Musalman (Muslim).” Thereafter Guru Nanak Dev Ji embarked on his long journeys called ‘Udasi’.

My father Jatinder Singh Bawa found Gurudwara Ber Sahib to be calm and quiet, perfect to contemplate on God. The present building of Gurudwara Ber Sahib was built by Maharaja Jagatjit Singh of Kapurthala. It stands on a high plinth, with it’s entry through a portico supported by octagonal columns. At the far end, marked off by a high archway decorated with floral designs in stucco, is the sanctum sanctorum, where the present Guru, Sri Guru Granth Sahib is seated on a white marble canopied throne. Besides the daily services and observance of important Sikh anniversaries, a largely attended fair takes place annually on the birthday of Sri Guru Nanak Dev Ji. 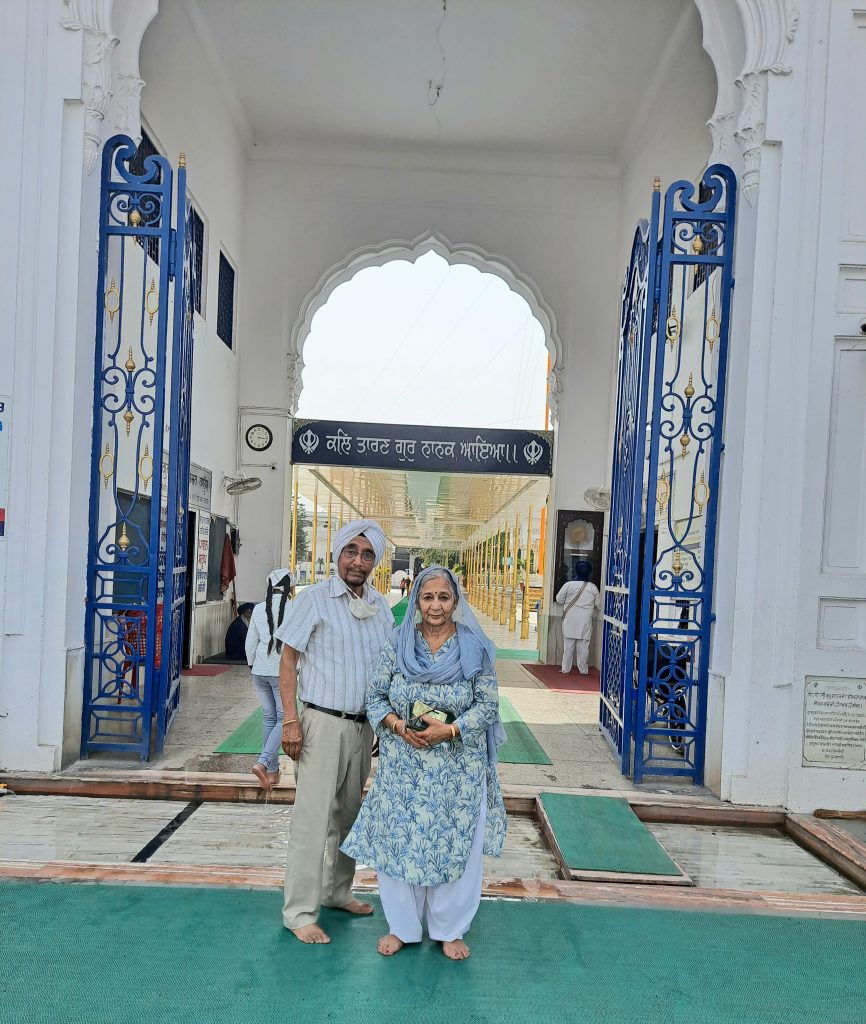 Our next pitt stop was along the banks of River Beas. Associated with the third, fourth and fifth Guru Sahib of the Sikh religion, Goindwal Sahib is where our third Guru, Guru Amar Das Ji resided for 33 years. A Baoli (stepwell), paved with 84 steps was constructed there. It is believed that by reciting Japji Sahib at each of the 84 steps after shnan (taking a bath) in the Baoli provides Moksha, liberation from 84,00,000 cycles of life of this world and unity with God (mukhti). I felt blessed to do snan at Baoli

Goindval sahib is the auspicious place where Guru Amar Das Ji stopped the practice of ‘Sati’ for Sikhs. He wrote Path Sri Anand Sahib. It was at Goindwal Sahib that Guru Ram Das Ji, performed selfless seva and became the fourth Guru. On 15 April 1563, the fifth Guru Sahib, Guru Arjan Dev Ji was born there. 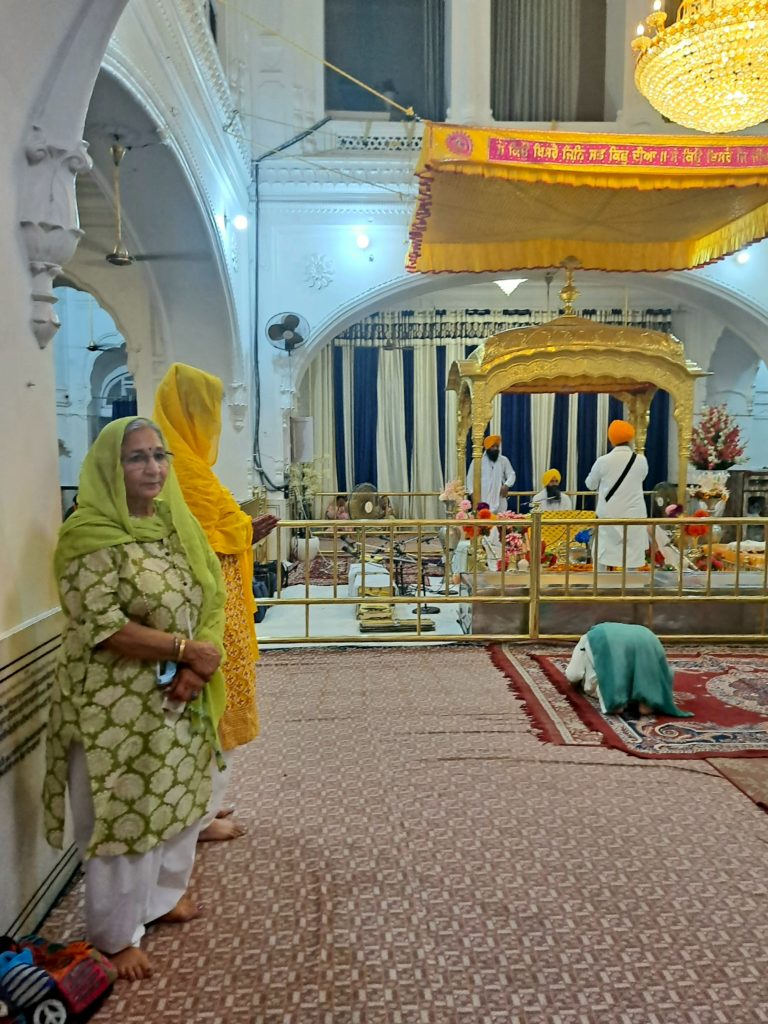 The next morning found us walking to Gurudwara Sri Chaubara Sahib, the home of Guru Amar Das and his family. Sri Guru Granth Sahib within the Gurdwara is seated in the front room on a silver palaki. This room has doors covered with silver. Amongst may other sacred artefacts housed at Sri Chaubara Sahib are the kesh (hair), chola (garment) and Kili Sahib of Guru Amar Das Ji, the tham Sahib where Guru Arjan Sahib used to play as a child and the Palki Sahib in which Guru Arjan carried the Gurbani of the first four Gurus to Sri Harmandir Sahib, Amritsar. My mother, Nanhi Bawa made it a point to go down the spiral staircase to the basement where the original brick walls held together by mud still stands tall. It is there that we witnessed the chullah and chakki used by Bibi Bhani Ji to cook food for her family. 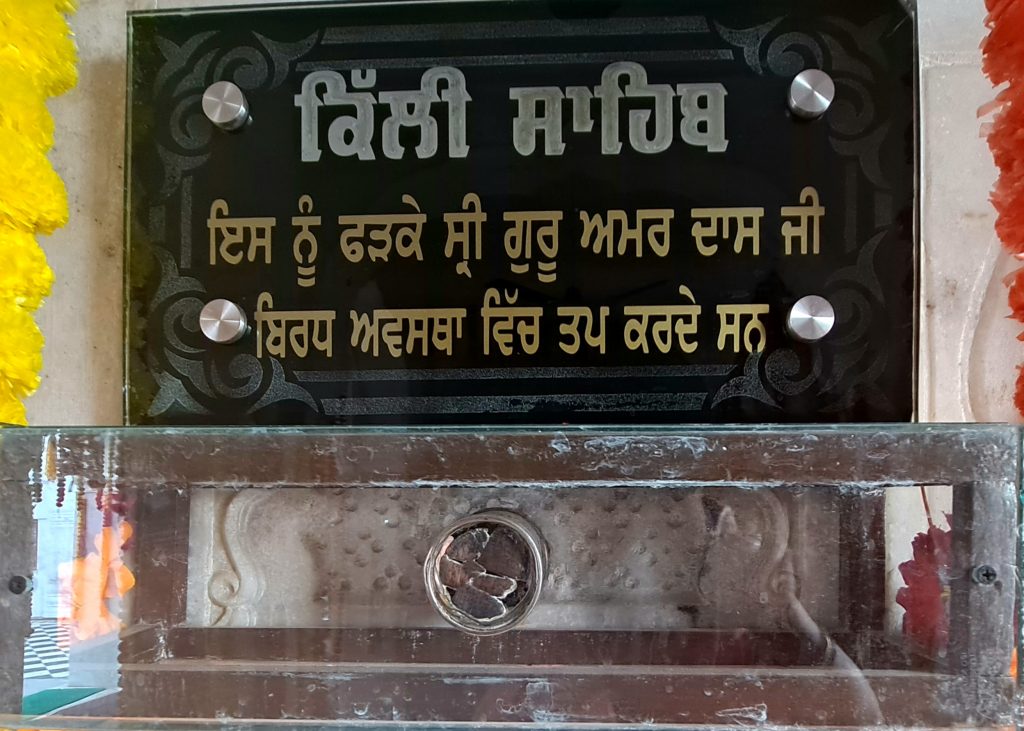 Soon it was time for us to drive to Sri Harmandir Sahib, the Golden Temple has a squarish plan with four entrances, and a ‘Parikrama’ circumambulation path around the pool. The four entrances to the temple symbolising equality where all are welcome irrespective of caste, colour, creed and race etc.

Sri Harmandir Sahib is a collection of buildings around the sanctum and the man-made pool. One of these is Akal Takht, the chief centre of religious authority of Sikhism. Additional buildings include a clock tower, the offices of the Gurdwara Committee, a museum and a langar hall– a free Sikh community–run kitchen that offers a vegetarian meal to all visitors without discrimination.

In 1830 Maharaja Ranjit Singh overlaid the sanctum with gold leaf. Since then, the 22-karat gold, which is collected by the Gurudwara Prabandhak Committee is first purified into 24 karat gold for the gold leaf. Sri Harmandir Sahib is thus also called The Golden Temple.

The sarovar sahib (man-made pool) was completed by the fourth Sikh Guru, Guru Ram Das in 1577. In 1604, Guru Arjan placed a copy of the Adi Granth in Harmandir Sahib. Later on, the tenth Guru, Guru Gobind Singh added the compositions by his father, the ninth Guru, Guru Tegh Bahadur Sahib to the Adi Granth. Over 100,000 people visit Sri Harmandir Sahib daily for worship. My father sahib had been driving since we had started our pilgrimage from Jalandhar. Needing a well-deserved break we arrived at Taj Swarna at Amritsar. 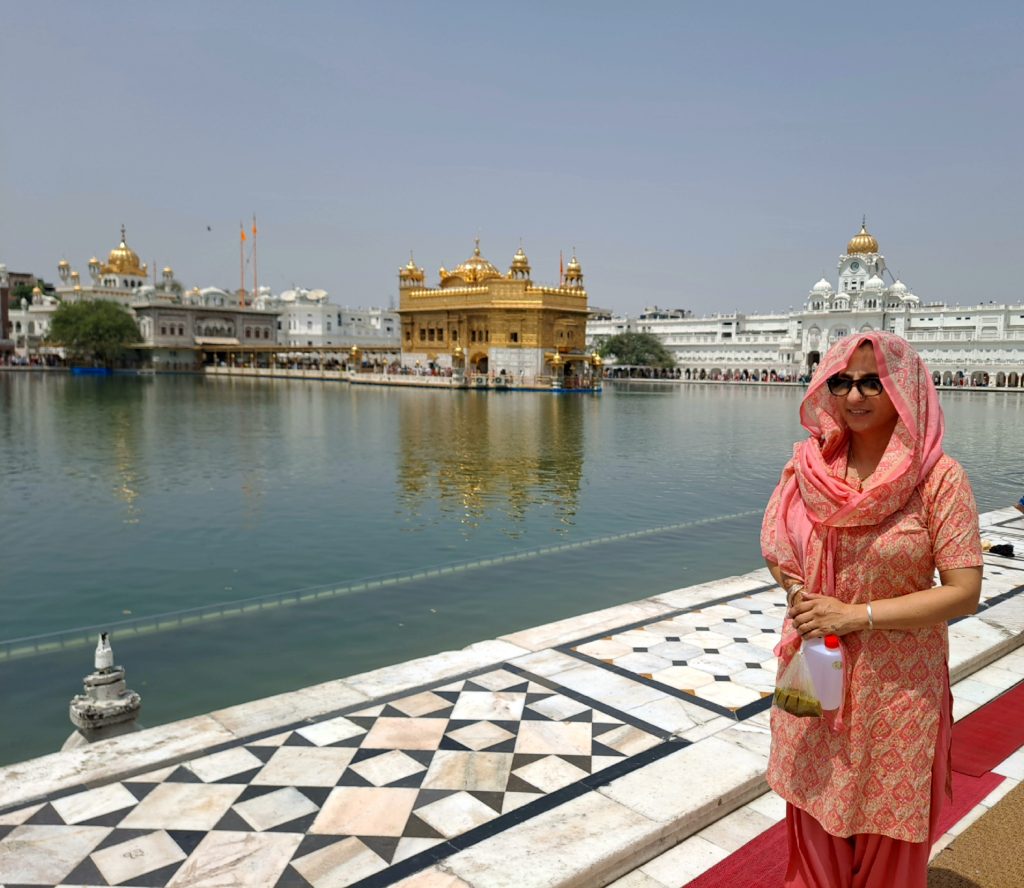 The welcome we received was warm, classy and efficient. “The operations at Taj Swarna are highly influenced and guided by our brand ethos and standards. At IHCL – we believe ‘Atithi Devo Bhava’ (Guest is God) and the same is practiced both in front of the guests, as also behind the scenes. We ensure our guests, who are here on pilgrimage are assisted from the beginning till the end, made to ‘feel at home’ and delighted by our distinguished authentic culinary options”, expressed Jagat Singh Rathore, Head Operations Taj Swarna.

Our accommodation was perfect in every manner. The ambience and food served at Grand Trunk restaurant made our stay ever more memorable.  Annie Randhawa, the PR head, shares, “Taj Swarna over the years is identified as the most iconic property in Amritsar as far as hospitality is concerned. Our warm hospitality, extended concierge services, the feel of ‘home away from home’ for our guests, the authentic food served at our restaurants are some of the key selling points making Taj Swarna a hot favourite both in the domestic and the international front”.

The next morning we had plans to visit Gurudwara Darbar Sahib, Kartarpur Sahib at Pakistan and decided to catch up with one of the pilgrims Sardar Paramveer Singh. Here is his take on his pilgrimage in the recent past. “It was an extremely emotional, powerful and an overwhelming experience for me. I found it to be the most peaceful holy place. One could take blessings just from the sheer sight of Gurudwara Darbar Sahib. The breathtakingly beautiful ivory building, with its polished floors and the rectangular passageways leading to Guru Granth Sahib Ji held me mesmerised. Going on the blissfully surreal pilgrimage inspired me as the General Manager of Taj Swarna, Amritsar, to go that extra mile for the pilgrims who make our grand hotel a pitt stop before embarking on their pilgrimage. Beginning with a warm welcome as they step into the grandeur of Taj, witnessing its unmatched hospitality and services. At Taj Swarna we empower the pilgrims with the updated information on various religions spaces at Amritsar and its surrounds, as well as provide them with scrumptiously delicious, packed meals for the day”. 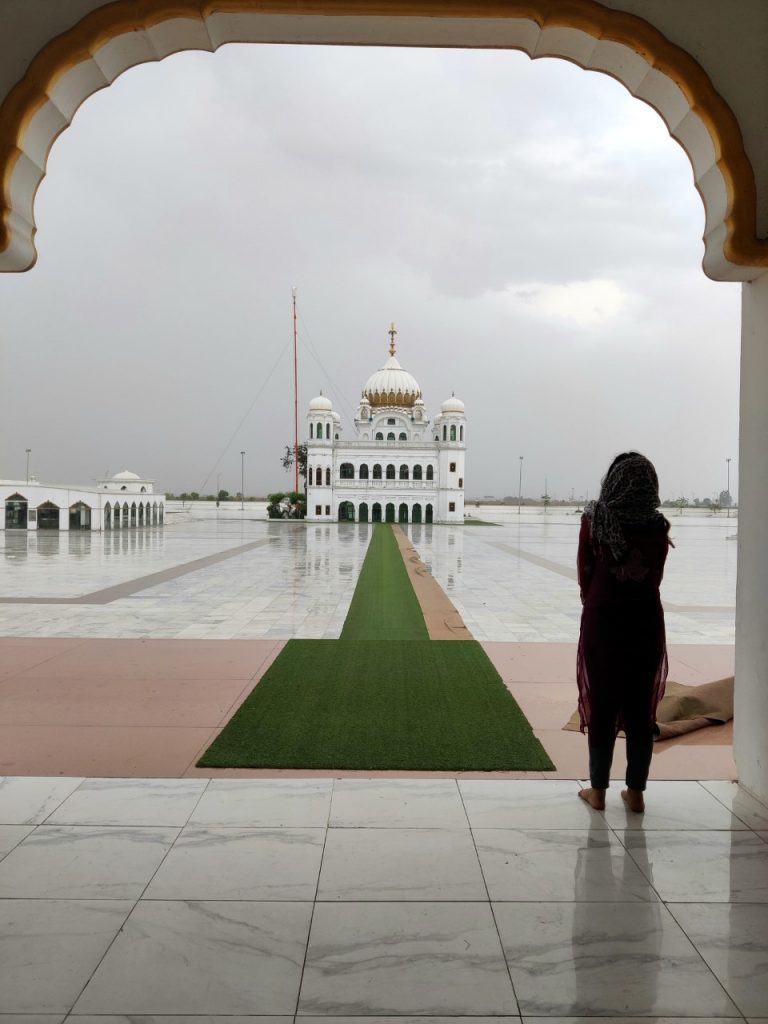 In 1515 AD, Sri Guru Nanak Dev Ji founded the township of Kartarpur (Pakistan), donning the clothes typical of a Punjabi farmer and began to cultivate the land around his new settlement. His family joined him and He lived the life of a householder for 18 years.

Guru Nanak Dev Ji initiated the Sikh tradition of Guru ka Langer (a communal kitchen). Sangat came from far and wide to join the community and were provided accommodation at the sarai. Daily they gathered to listen to Gurbani (Guru’s discourses) and Kirtan. The Guru ka Langar was the place where the Guru’s belief in the equality of every man and woman was first manifested in India, which had long been a segregated society based on the idea of varna, more commonly known outside of India as caste. People dined together irrespective of their former caste, creed or even their wealth. The food was grown, prepared and served by the sangat taking turns as volunteers. Guru Nanank Dev Ji left his chola (breathed his last) in 1539. 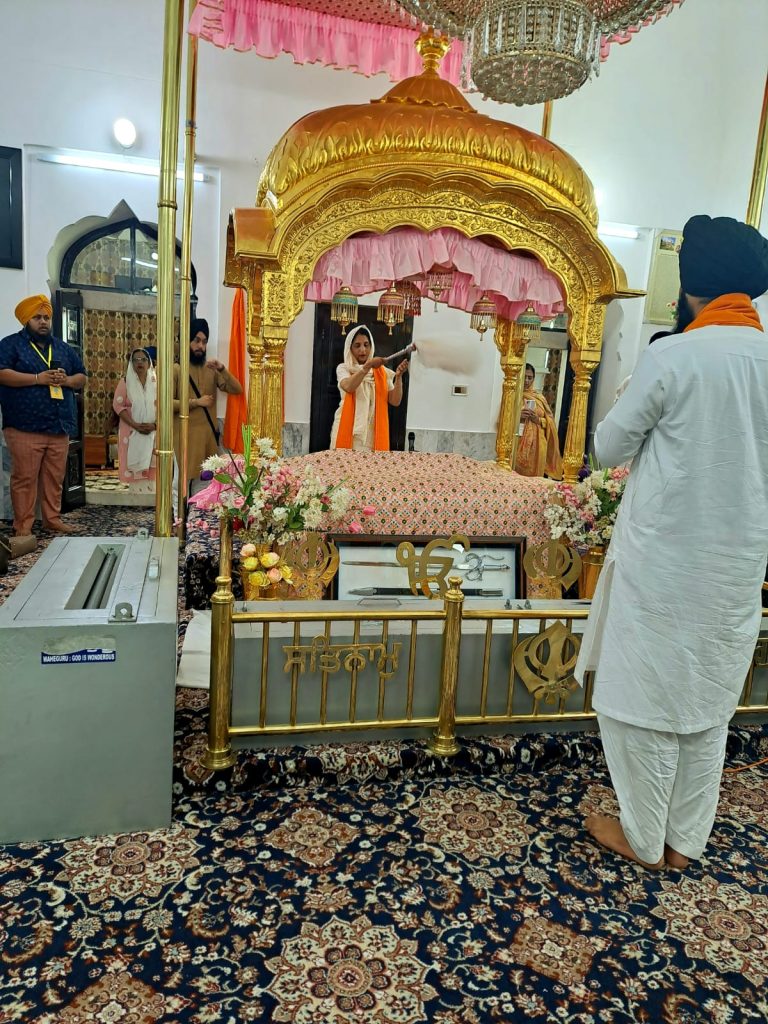 As for our family, the process of clearing the Indian and Pakistani immigration was seamless. We soon found ourselves standing in front of Gurudwara Darbar Sahib at Kartarpur in Pakistan.

The 4.7 kilometres Kartarpur Corridor from India to Pakistan is a visa-free border crossing and religious corridor for pilgrims from India. The Pakistani government started renovating Gurudwara Sri Darbar Sahib in September 2000 and formally reopened it in September 2004.

Gurudwara Darbar Sahib significantly upholds the teaching of equality and unity of people of all religion and promotes peaceful living and harmony. 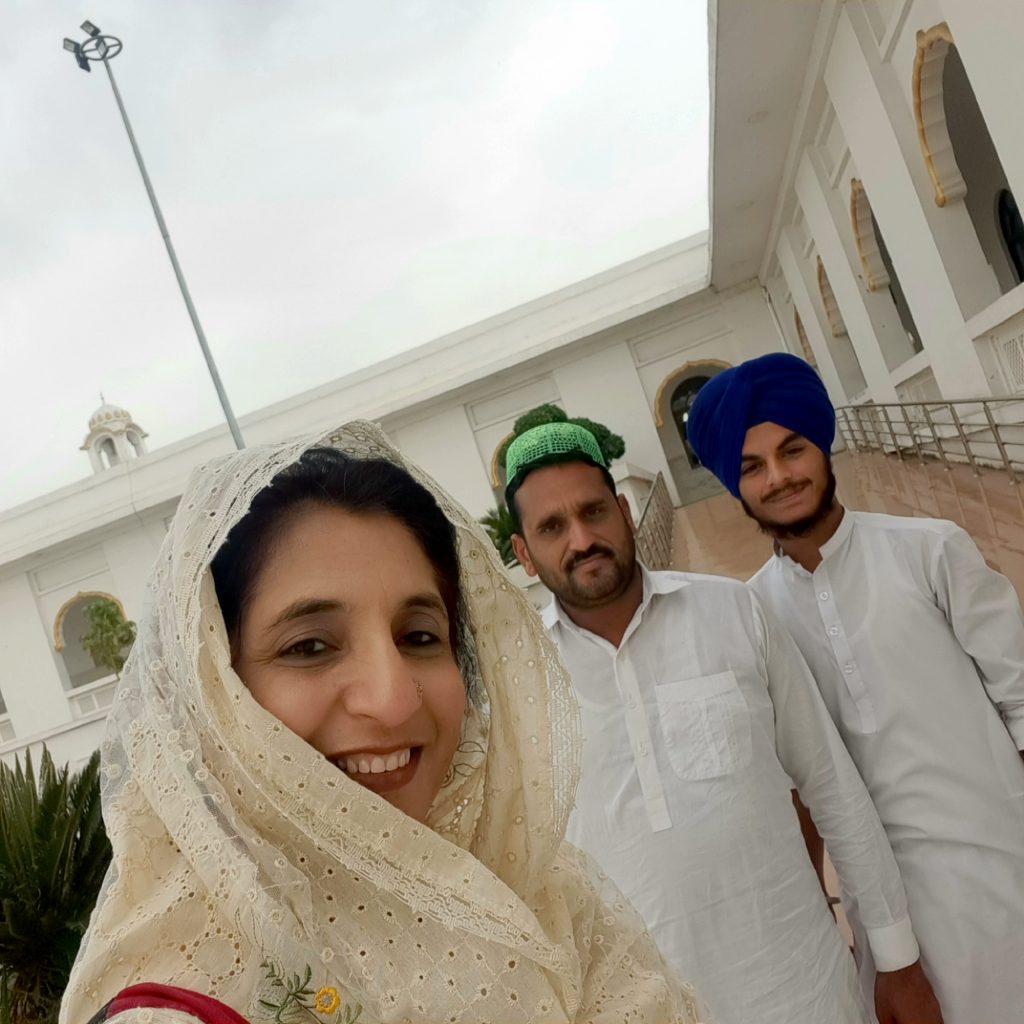 Registration can only be done online via: www.prakashpurb550.mha.gov.in

The hours we spent at Gurudwara Sahib were beautiful. The warmth from our Pakistani counterparts added to the bliss we experienced. Our pilgrimage came to a close and we headed home satisfied and feeling spiritually high.

Wishing you the best on your pilgrimage. 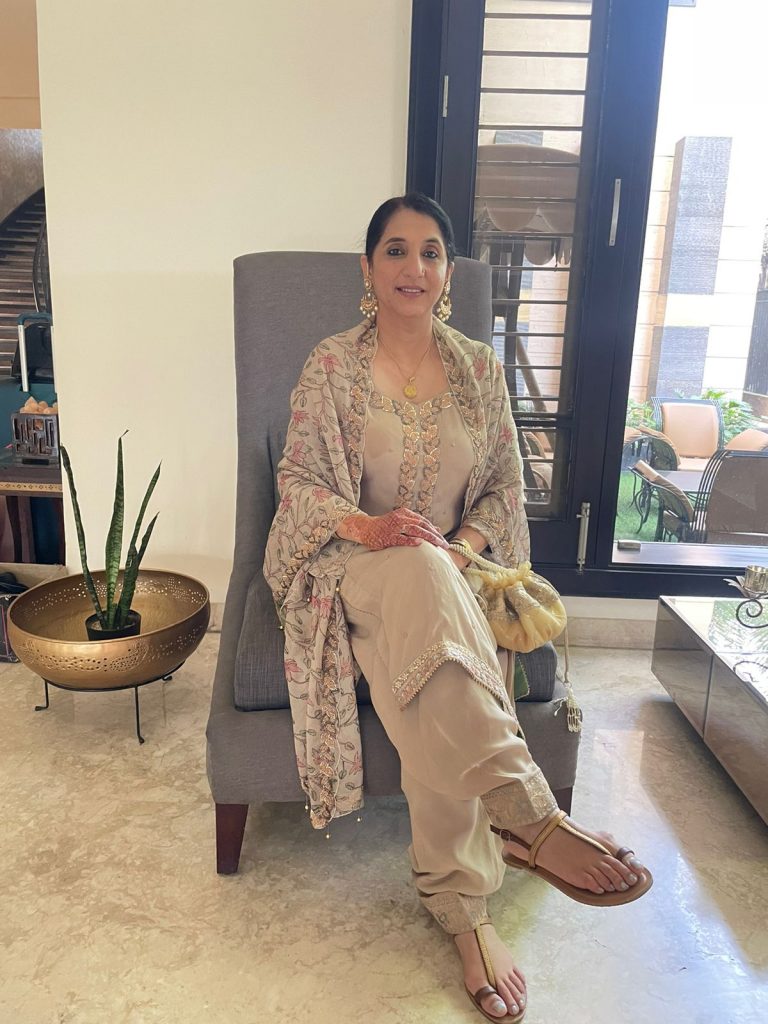 Things You Need To Know About India’s Iron Woman