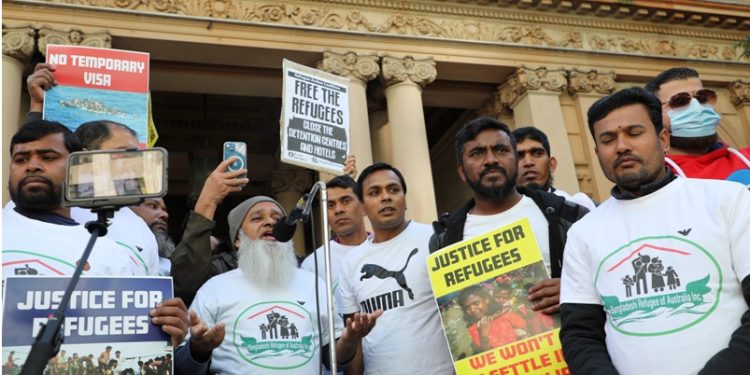 Thousands of refugees and supporters are expected to converge at Sydney Town Hall. Asylum seekers & supporters marched from Sydney Town hall to Hyde Park. The rally called on the new Labor government to convert Temporary Protection Visas and SHEVs to permanent ones immediately, after refugees have spent up to ten years without family, and having their children miss out on university, 2pm, Sunday 24 July 2022. Boats being sent back and offshore detentions need to end for good. 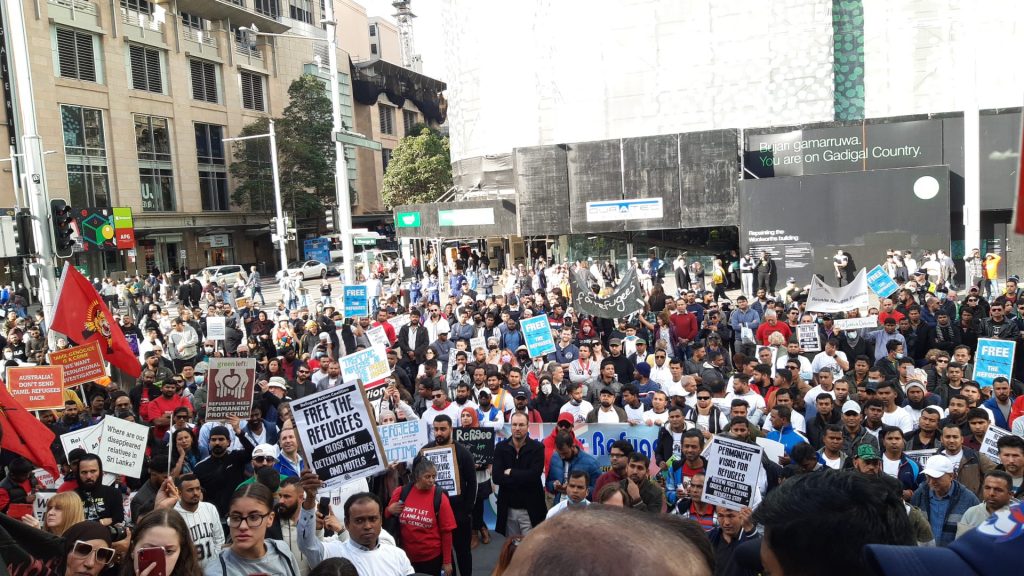 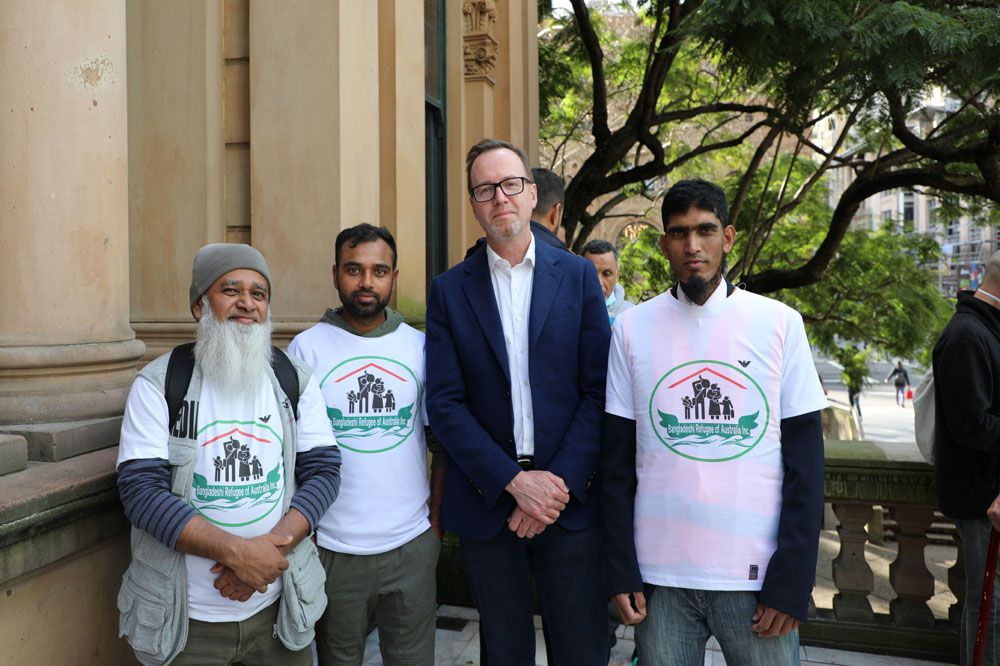 The rally is part of national protests to mark the ninth anniversary of 19 July 2013, when Kevin Rudd declared Pacific Solution II and  that asylum seekers who arrived by boat would be sent to Manus Island and Nauru and never allowed to settle permanently in Australia.

19 July set the stage for the Coalition’s Operation Sovereign Borders and was the beginning of nine long years of abuse and demonisation of refugees and people seeking asylum.

The end of the Morrison government has left over 19,000 refugees on Temporary Protection Visas and SHEVs; people who worked during the pandemic are separated from their families, denied the right to travel, and their children denied tertiary education.  Labor has promised they will all be granted permanent visas – but they are still waiting to hear when and how that is going to happen. 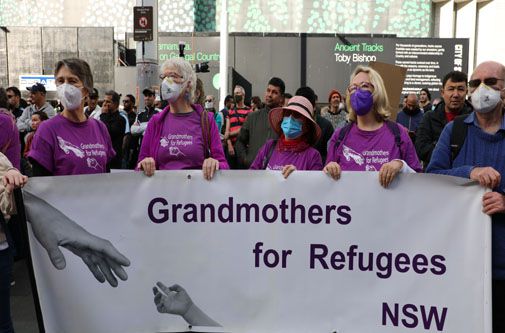 Thousands of others are on bridging visas that have to be renewed every six months. Afghanistan is firmly in the grip of the Taliban and crisis has paralysed Sri Lanka. Thousands of people from Sri Lanka and Afghanistan who can never return to their countries are victims of the fast-track processing system that has rejected their protection claims.

Thanus, a Tamil refugee brought to Australia from PNG under the Medevac laws, said “…July 19 policy has destroyed our lives & continues to make us suffer… this Government could change one or two words in this visa, just to let us study, to travel, but there has been no change. 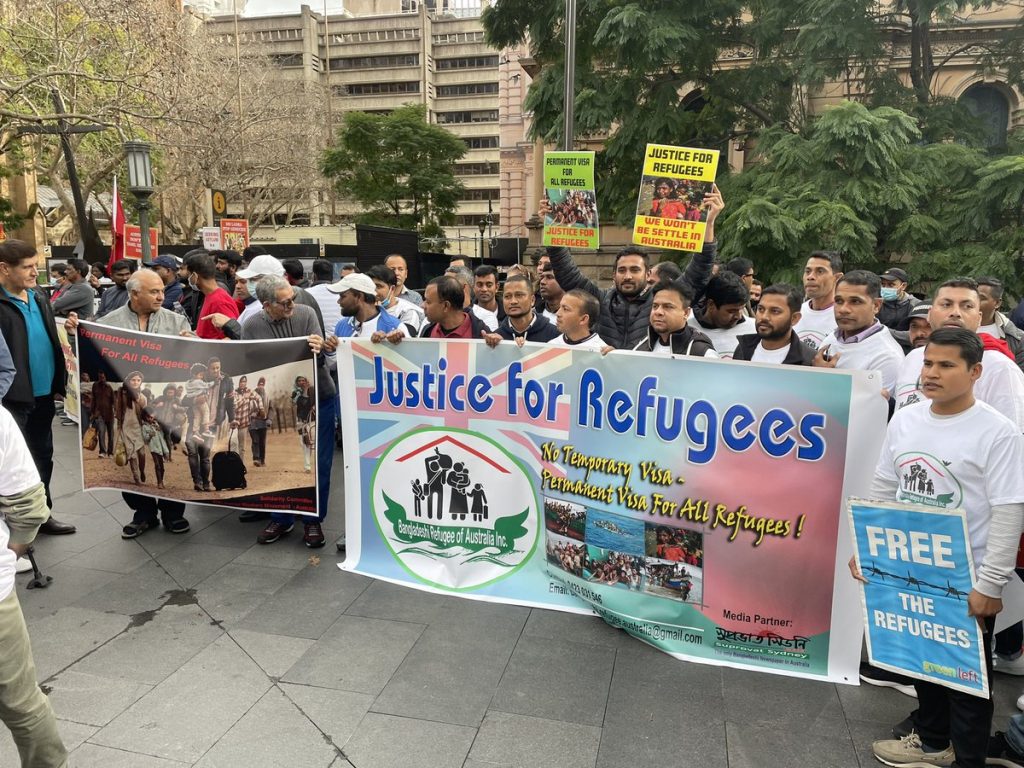 “We can look after ourselves; we just need permanent resettlement…A permanent visa that is it, that is all.”

“When he was elected Anthony Albanese declared that ‘no-one would be left behind’. But refugees and asylum seekers are being left behind,” said refugee leader Ian Rintoul, spokesperson for the Refugee Action Coalition, “Some of the punitive conditions imposed by the Morrison government could be changed with a flick of the Minister’s wrist. 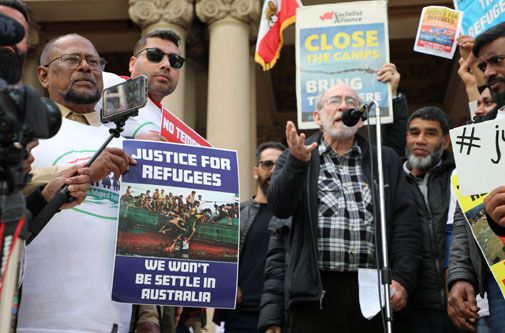 Md Abdullah Yousuf, Bangladeshi refugee chief advisor said, “Our refugee brothers & sisters did not come here for holiday. The government of Bangladesh is targeting students, businessmen and opposing politicians, as well as enforcing their disappearances, extra judicial killing them. That’s why they are unable to stay there. The current government of Bangladesh oppresses innocent people, so they have no choice but to run way from the country. When they came to Australia in order to save their lives, the Australian government continues to play with them. It is time to see what the current government done. Bangladeshi Refugees are suffering from their own High commission and consulate. They are government servants but treating refuges like animals. Refugees need to be treated as equals and fairly like others. He urged and requested the Australian government: Please give them (Refugees and Asylum seekers) a chance, accept them as a Permanent visa holder and give them the opportunity to contribute to the community, shoulder to shoulder in society. “All the refugees are very tired. After ten years, they have waited enough.” 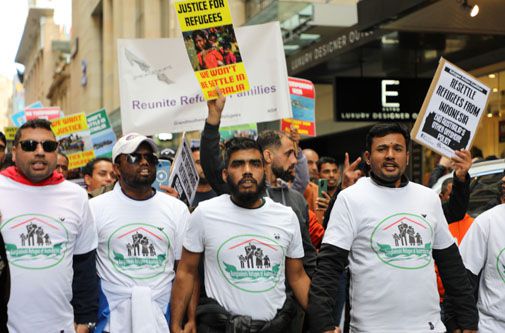 Bangladeshi Refugees of Australia Incorporated (BRA) arranged excellent large Banners and T-shirts, as well as some colourful play cards which attracted a lot of the audience. Suprovat Sydney, the only Bangladeshi Newspaper in Australia (www.suprovatsydney.com.au), were the Media Partner of the events. Around 200 Bangladeshis joined and took a vital role on the rally.

This report was provided by: Md Abdullah Yousuf   (Editor in Chief Suprovat Sydney)