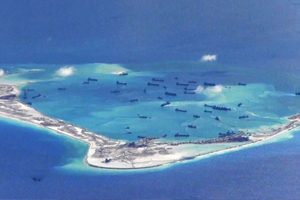 Manila: With China’s controversial military buildup likely to be a major issue at the ASEAN summit, Premier Li Keqiang on Sunday clearly reiterated Beijing’s long-held position that it wants to bilaterally resolve its disputes with its neighbours over the South China Sea.

In an article published in leading newspapers here, Li admitted that the bilateral relationship between China and the Philippines had “encountered a setback” due to the South China Sea issue but it was back on track due to appropriate handling of the issue by the two sides.

The Chinese premier, who will be here for the ASEAN and East Asia summits, said Beijing will actively explore joint development of the South China sea to make it a “sea of cooperation and friendship” for the benefit of the two countries.

“China will work with the Philippines to continue to properly handle the maritime issues through friendly bilateral consultation by giving full play to such mechanisms as the Bilateral Consultation Mechanism on the South China Sea,” Li wrote.

Ahead of the annual summit of the ASEAN, an influential grouping of 10 South East Asian countries, a number of diplomats said the thorny issue of China’s aggressive military buildup in the South China Sea may be one of the focus areas of the deliberations on Tuesday.

China claims sovereignty over all of South China Sea, a huge source of hydrocarbons. However, several ASEAN member countries including Vietnam, the Philippines and Brunei have counter claims.

India has been supporting freedom of navigation and access to resources in the South China Sea in accordance with principles of international law, including the 1982 UN Convention on the Law of the Sea.

The ASEAN has been pushing for a legally binding code of conduct for all stakeholders in the South China Sea but Beijing has opposed such a framework asserting it will resolve the dispute with respective countries under a bilateral mechanism.

“The two sides returned to the track of appropriately handling the South China Sea issue through dialogue and consultation, thus removing the stumbling block that has held back our bilateral relations for several years,” Li said.

The controversial issue was also understood to have figured in a meeting of officials from India, the US, Japan, and Australia under the proposed Quadrilateral coalition of the four countries.

“The discussions focused on cooperation based on their converging vision and values for promotion of peace, stability and prosperity in an increasingly inter-connected region that they share with each other and with other partners,” the ministry of external affairs (MEA) said.

“They agreed that a free, open, prosperous and inclusive Indo-Pacific region serves the long-term interests of all countries in the region and of the world at large,” it said.