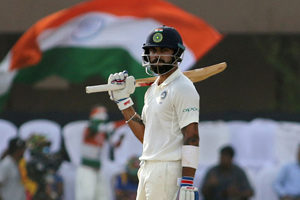 Kohli, 29, took a single off the fifth ball of the 168th over, bowled by Dilruwan Perera, to reach the landmark. Earlier in the innings, he became the first captain to hit 10 centuries in a calendar year.

He stitched a 173-run fifth-wicket stand with Rohit Sharma as India continued pile runs against a hapless Sri Lankan bowling attack on the third day of the second Test in Nagpur on Sunday.

Kohli’s all double hundreds have come against different oppositions. His first double hundred, 200, came in July 2016, against West Indies at North Sound. It was followed by 211 against New Zealand at Indore in October 2016, 235 against England at Mumbai in December 2016 and 204 against Bangladesh at Hyderabad in February 2017.

Kohli finally got out after making 213 off 267 runs, with the help of 17 fours and two sixes, caught at long-on off the bowling of Dilruwan Perera in the 170th over.

Lara, who played 131 Test matches for West Indies, hit his first double hundred in 1993 against Australia at Sydney. The Windies great his his fifth and last double ton in 2006 against Pakistan at Multan.