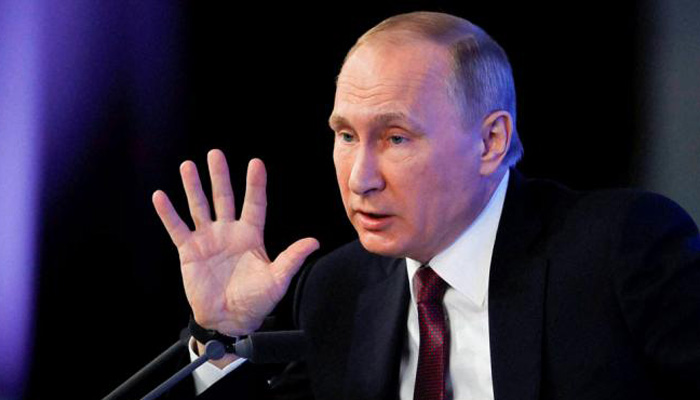 Sochi/Moscow: Vladimir Putin said on Wednesday that US President Donald Trump had not divulged any secrets during a meeting in Washington with Russian officials and offered to prove it by supplying Congress with a transcript.

But a leading US Republican politician said he would have little faith in any notes Putin might supply.

Trump, whose administration has been dogged by allegations that Russia helped him win the White House and that he and his allies are too cosy with Moscow, has defended his decision to discuss intelligence with the Russians after media reports of the meeting alarmed some U.S. and foreign politicians.

President Putin deployed his trademark sarcasm on Wednesday to make clear he thought the accusation that Trump had divulged secrets absurd.

“I spoke to him (Lavrov) today,” a smiling Putin told a news conference with Italian Prime Minister Paolo Gentiloni in the Russian Black Sea resort of Sochi.

“I`ll be forced to issue him (Lavrov) with a reprimand because he did not share these secrets with us. Not with me, nor with representatives of Russia`s intelligence services. It was very bad of him.”

If the Trump administration deemed it appropriate, Putin said Russia could hand over a transcript of Trump`s meeting with Lavrov to U.S. lawmakers to reassure them that no secrets were revealed.

A Kremlin aide, Yuri Ushakov, later told reporters that Moscow had a written record of the conversation, not an audio recording.

US Republican Senator Marco Rubio was unimpressed with Putin’s offer and alluded to alleged Russian hacking of Democratic groups during the U.S. presidential election.

“I wouldn`t put much credibility into whatever Putin`s notes are,” Rubio said on Fox News. “And if it comes in an email, I wouldn`t click on the attachment.”

Representative Adam Schiff, the top Democrat on the House Intelligence Committee, which is among those probing alleged Russian interference in the 2016 US election, called Putin`s offer “quite amusing.”

“The last person Trump needs to vouch for him right now is Vladimir Putin,” Schiff said in an interview with CBS News. “If they want to send something, you know, hats off. Send it our way… It`s credibility would be less than zero.”

Russia has repeatedly denied interfering in the U.S. election.

The allegation stems from a memo written by Comey and seen by a source familiar with the contents of the memo.

In Washington, Republican and Democratic lawmakers said they wanted to see the Comey memo. U.S. Representative Adam Kinzinger joined a small but growing number of Republican lawmakers who have said they would back some sort of independent investigation into Russia’s role in the 2016 election.

“If in fact what was in the memo is true, it`s very concerning and we need to get to the bottom of that,” Kinzinger said on CNN.

Complaining about what he said was “political schizophrenia” in the United States, Putin said Trump was not being allowed to do his job properly.

“It`s hard to imagine what else these people who generate such nonsense and rubbish can dream up next,” said Putin, referring to unnamed US politicians.

Russia has repeatedly said that Trump`s opponents are trying to damage him and Moscow by making what it says are false accusations about the billionaire president and the Russian government which initially had high hopes of a rapprochement.

Officials have told Reuters Trump`s alleged disclosure of classified information to Russia`s foreign minister is unlikely to stop allies who share intelligence with Washington from cooperating.

That view was reinforced on Wednesday when British Prime Minister Theresa May said her government had confidence in its relationship with the United States and would continue to share intelligence with Britain`s most important defence and security ally.

Election Commission to announce schedule for its ‘EVM challenge’ on Saturday

Election Commission to announce schedule for its 'EVM challenge' on Saturday

US says it could remove India from currency monitoring list