Playing only his second junior Grand Slam, 17-year-old Samir Banerjee won 7-5, 6-3 in the final that lasted one hour 22 minutes. Banerjee's parents had moved to America in 1980s. 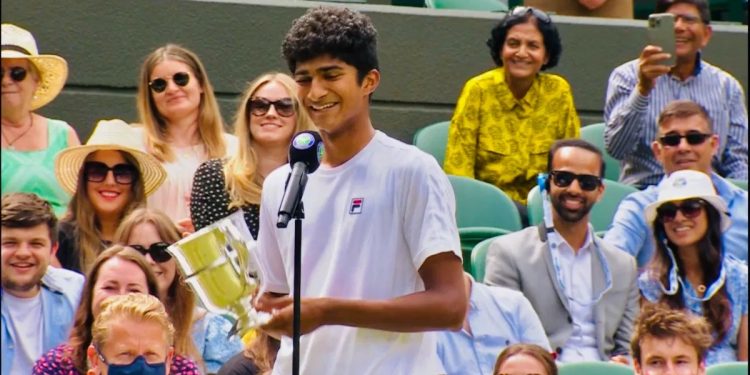 Playing only his second junior Grand Slam, the 17-year-old won 7-5, 6-3 in the final that lasted one hour 22 minutes. Banerjee’s parents had moved to America in 1980s.

At the junior French Open, Banerjee, ranked 19 in the world, had crashed out in the first round.

Samir Banerjee might well be a name you become more familiar with in the future#Wimbledon pic.twitter.com/byAEBwBrSp

This was Samir Banerjee’s second junior Grand Slam appearance. The Indo-American had bowed out in the first round of the French Open a few weeks ago. The teenager is 19th on the junior International Tennis Federation (ITF) rankings.

Samir Banerjee is a second-generation American. His father, born in Assam, and his mother, born in Andhra Pradesh, migrated to the USA in the mid-1980s.

The family resides in New Jersey and Samir Banerjee hopes to enroll for a degree in either economics or political science at Columbia University in the coming months.

With his junior Wimbledon title, Samir Banerjee joins an illustrious list that features legends like Roger Federer, Bjorn Borg, Stefan Edberg and Ivan Lendl among others.

India has been struggling to field a worthy contender at junior Grand Slams for some time now.

Due to lack of a robust domestic circuit and not having enough competitions at home to earn world ranking points, India has been struggling to create the next crop of youngsters.

The first one to do so was Ramanathan Krishnan, who won in 1954.

His son Ramesh Krishnan emulated the feat, winning it in 1979, adding to his junior French Open crown earlier in the year.

The last Indian to win the junior Wimbledon singles title was Leander Paes in 1990.

Sania Mirza is the only female Indian tennis player to win the junior Wimbledon title. She partnered with the ROC’s Alisa Kleybanova to win the Wimbledon girls’ doubles title in 2003.

Leander Paes and Sania Mirza are the only junior champions who have gone on to win the senior Wimbledon doubles titles, of course with separate partners.

‘The stars aligned’: Ash Barty’s Wimbledon win is an historic moment for Indigenous people and women in sport