Australian cricket star Glenn Maxwell has revealed he will likely have to increase security at his wedding after the invitation to the week-long extravaganza was leaked online. 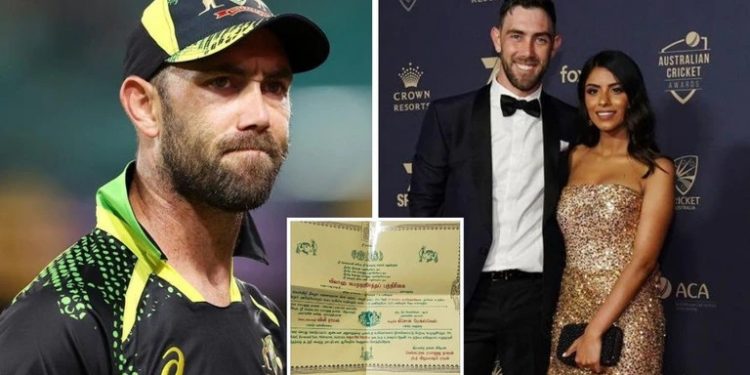 Maxwell is marrying Vini Raman, who is of Indian descent, in a traditional Hindu ceremony involving several events spanning a week.

The powerful batter was informed the details of their wedding had been leaked when an ex-Indian Premier League teammate got in touch to say he’d received several copies of the invite printed in the Tamil language.

Maxwell is already a superstar in India thanks to his IPL heroics but the fact he is marrying an Indian woman has created huge excitement among the Tamil community.

The wedding invite was shared on social media by Indian actor Kasturi Shankar and Maxwell admitted their big day would be a little more stressful now the Tamil-speaking world knew times and venue details in Melbourne.

GlennMaxwell marrying Vini Raman. Going by the cute traditional Tamil muhurta patrikai, we'd bet there may likely be a TamBram ceremony… Will there be a white gown wedding too?
Congratulations Glenn and Vini ! @Gmaxi_32 pic.twitter.com/uJeSjHM1we

“I had a bit of a worrying day the other day,” Maxwell told Fox Cricket during Australia’s T20 win over Sri Lanka on Tuesday night.

“I got sent a photo from one of my former IPL teammates who I hadn’t seen in a couple of years and he had been sent the Tamil wedding invite by a numerous amount of people.

“So unfortunately that was making the rounds online. I think we’re going to have to increase security at our Hindu wedding.

Maxwell explained the wedding was a week-long affair that would begin on a Monday and go until the following Sunday.

“There’s three events during the week including two the week before,” he said.

“It’s a bit of a festival for my wedding this year.”

Former Australian fast bowler Brett Lee, who has starred in Bollywood movies and is well known in India, said Maxwell’s wedding would go as long as a “Test match”.

Settling on a date for the wedding has been a headache for Maxwell, who thought he had found a gap in his jam-packed cricketing schedule in March.

However, Cricket Australia since announced a historic tour of Pakistan, but Maxwell has decided to keep the date for the wedding and miss the tour so he can tie the knot.

“Originally when I organised the dates with CA there was a two week gap where I could potentially have it, so when I sorted that out I was pretty happy I wasn’t going to be missing any series,” he said.

“Then it came to the contract meeting midway through last year and (CA) said this is the Pakistan series and I said, ‘well that’s obviously changed since the last conversation we had’ … but happy wife, happy life.

“I know I was pretty hopeful to be on one of the Test tours this year and unfortunately with all the scheduling changes it (wedding) happened to fall during this one.”

NSW is one step closer to banning the Nazi swastika

When we open up, let’s open up big: top economists say we need more migrants

When we open up, let’s open up big: top economists say we need more migrants